As Brazilians Arrive at the US Border, a Suspected Smuggler Profits

Update Required To play the media you will need to either update your browser to a recent version or update your Flash plugin.
By Gregory Stachel
15 October 2021


Record numbers of Brazilians have been arrested at the United States' southern border this year. Police believe the investigation into one man has led them to one of the smuggling operations that moves migrants north.

In early June, Brazilian federal police arrested Chelbe Moraes. He is a Brazilian businessman who is suspected of illegally taking his daughter to Paraguay after a dispute with her mother.

During the investigation into the charges, police listened to the phone calls of Moraes' business partners. The officers began to suspect Moraes was an experienced people smuggler, or "coyote."

On June 25, a police report was sent to a federal judge and seen by Reuters. It asked that several criminal charges be filed against Moraes, including illegally moving a child, human smuggling and agreeing to perform an illegal act.

Police accuse him of charging Brazilians around $20,000 each to illegally enter the United States via Mexico without legal visas. Court documents say Moraes built an international network that includes corrupt police officers and officials, and U.S.-based family members.

Moraes said he is innocent. He told Reuters he runs a lawful agency that informs people on how to get asylum in the United States. He said he has helped up to 200 people over 20 years. He charges those who meet U.S. rules on asylum up to $18,086 to help them migrate.

Moraes said his information is costly, "... because I know American laws."

U.S. Customs and Border Protection, or CBP, say during the first 11 months of the 2021 financial year, 46,280 Brazilians were arrested by officials at the southern U.S. border, making them sixth among nationalities arrested at the border in 2021. More than 550,000 Mexicans have been arrested.

It is part of a wave of Latin American migrants leaving countries whose economies have been damaged by COVID-19. Southern border arrests have jumped to their highest levels in 20 years.

As of now, Moraes remains free in Brazil after saying he was not guilty of illegally taking his child to Paraguay. No charges have been placed in connection to a possible smuggling operation. This permits police to continue their investigation of Moraes.

Two people who knew of his suspected actions, a former customer and a former partner, talked with Reuters. They said Moraes tells his customers to act like tourists when they arrive in Mexico. They also said Moraes sometimes helps his customers by paying Mexican immigration officials. 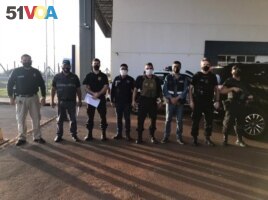 Personnel of the General Directorate of Migration, agents of the Paraguayan office of INTERPOL and members of the Federal Police of Brazil pose for a photo, during the handover of Brazilian citizen Chelbe Willams Moraes in an unknown location, June 7, 2021.

The two people said Moraes transports the Brazilians north. They either jump the border with the help of paid Mexican coyotes, or they ask for asylum by using false papers and stories Moraes has prepared.

People who can prove they face mistreatment at home because of their race, religion, nationality, social group or political opinions may meet the requirements for U.S. asylum. Those who enter the U.S. may remain for years in the states while their cases are processed because of the number of cases courts have.

Moraes said those who claim he ran a smuggling operation were "induced" to do so by police or did not like him due to his success.

But he recognized he has gained from Brazil's problems.

He said, "The worse the government here gets, the better for me."

Gabriel Stargardter reported this story for Reuters. Gregory Stachel adapted it for VOA Learning English. Susan Shand was the editor.

induce – v. to cause (someone or something) to do something