Update Required To play the media you will need to either update your browser to a recent version or update your Flash plugin.
By Susan Shand
14 April 2020


Sweden has not banned public gatherings like most countries have because of the coronavirus pandemic.

Crowds recently gathered near the waterfront in Stockholm to enjoy the sun. Anders Tegnell said he is not worried. He is the country's medical official leading the fight against the coronavirus pandemic.

The 63-year-old has become famous in Sweden. He appears on television every day. He tries to calmly explain the development of the outbreak. 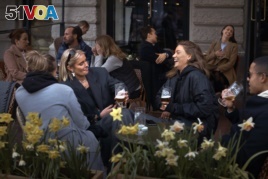 FILE - In this Wednesday, April 8, 2020 file photo people chat and drink outside a bar in Stockholm, Sweden. Sweden is pursuing relatively liberal policies to fight the coronavirus pandemic, even though there has been a sharp spike in deaths. (AP Photo/An

Countries across Europe have restricted the movement of their citizens, but Sweden has not. Tegnell says Sweden is finding a different way that is more "sustainable."

Sweden is using what some call herd immunity. This can involve letting people become infected so that large numbers of people develop immunity in the population.

President Donald Trump has said that Sweden is suffering as the result.

"Sweden did that -- the herd. They called (it) the herd. Sweden is suffering very, very badly. It's a way of doing it," he said.

But Swedish Health Minister Lena Hallengren recently told The Associated Press that the country is not trying herd immunity.

Sweden has banned gatherings larger than 50 people, and closed schools for older children and universities. It has told those over 70 to stay home to avoid the virus.

Schools for younger children, restaurants and most businesses are still open. It appears to be normal life.

But, financial expert Johan Klockar says it is not normal life. He and his wife work from home and avoid going out. They see few people, and they limit their son to seeing people at school and sports activities.

"Society is functioning, but I think it's...limited," Klockar said. "We basically stay at home."

Most businesses in Sweden are still open, but the economic cost of the pandemic is already being felt. Last week, unemployment rose by 25,350 Swedes, officials said. It is a greater one-week rise in joblessness than during the 2008 financial crisis.

Nearby, neighboring Denmark is already considering reopening society. The country put a lockdown in place four weeks ago, closing schools, borders and businesses.

This week, the prime minister said acting quickly had helped Denmark avoid the tragedy that hit Italy and Spain. Together, those two nations have had 37,000 deaths. They are just beginning to consider a return to normal life.

For weeks, the percentage of COVID-19 cases and deaths in Sweden and Denmark were about the same. But while the economic results of the lockdown are being felt in Denmark, Sweden's death rate is now nearly double Denmark's.

After a sharp increase in deaths in Sweden, Prime Minister Stefan Lofven asked for an emergency law permitting the quick closure of public spaces and transportation if needed. Lofven also warned citizens to prepare for possibly thousands of deaths.

Tegnell, however, said that Sweden's way is still the most effective, but he admitted that the future is unclear. He believes Sweden will avoid the sudden increase in infections that may occur when a lockdown is removed.

"I think both Norway and Denmark are now very concerned about how you stop this complete lockdown in a way so you don't cause this wave to come immediately when you start loosening up," he said.

Lars Ostergaard is a professor at the Department of Infectious Diseases at Aarhus University Hospital in Denmark. He agrees it is too soon to know which way is best.

"There is no right or wrong way," Ostergaard said. "No one has walked this path before."

pandemic– n. when a disease spreads quickly among a large number of people over a wide geographic area

sustainable– adj. able to be continued without causing severe problems or using up resources

outbreak– n. the sudden appearance of a disease or conflict

herd immunity– n. when a large part of a population cannot become infected with a disease because they have immunity to it

lockdown– n. a security measure of keeping prisoners in their cells; a situation when people are not permitted to go out for a safety-related reason

functioning– adj. to work or operate