Update Required To play the media you will need to either update your browser to a recent version or update your Flash plugin.
By Ashley Thompson
16 November 2020


A 17-year-old Bangladeshi boy has won this year's International Children's Peace Prize for his work to fight cyberbullying in his country.

The prize winner, Sadat Rahman, promised to keep fighting online abuse until it no longer exists. "The fight against cyberbullying is like a war, and in this war I am a warrior," Sadat Rahman said during a ceremony on November 13 in The Hague, the Netherlands. He added, "If everybody keeps supporting me, then together we will win this battle against cyberbullying." 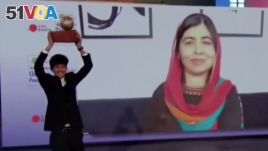 Sadat Rahman holds up his trophy prize as Malala Yousafzai cheers over video, during a ceremony on November 13 at The Hague.(Screenshot from Reuters video)

Rahman developed a mobile phone application that provides education about online bullying and a way to report cases of it. He said he began his work on the project after hearing the story of a 15-year-old girl who took her own life as a result of cyberbullying. "I will not stop until we receive no more cases through the app," Rahman said at the ceremony.

The award comes with a fund of over $118,000, which is invested by the KidsRights Foundation. The group chooses projects to support causes that are closely linked to the winner's work.

Past well-known winners of the prize include Pakistani human rights activist Malala Yousafzai. Swedish climate activist Greta Thunberg won the prize too. And students who organized the March for Our Lives event in 2018 after a deadly mass shooting at their school in the American state of Florida also won.

Yousafzai won the International Children's Peace Prize in 2013. A year later, she won the Nobel Peace Prize for campaigning for girls to have a universal right to education.

Yousafzai praised Rahman's work during the ceremony. She spoke through video conferencing.

"All children have the right to be protected from violence no matter if it is physical or mental, offline or online," she said. "Cyberbullying is a violation of that right."

cyberbullying –n. the electronic posting of cruel or mean-spirited messages about a person

application –n. a computer program that does a certain task

fund –n. an amount of money that is to be used for a special purpose