Update Required To play the media you will need to either update your browser to a recent version or update your Flash plugin.
By John Russell
07 August 2021


More than a year after Beirut's port explosion, workers and artists are still repairing destruction at the city's Sursock museum.

The museum, badly damaged by the August 4, 2020 blast, has long provided a rare public and free space for art in Lebanon. It even remained open during Lebanon's 1975-1990 civil war.

Sitting on hills in the Achrafieh neighborhood near the Beirut Port, the 60-year-old Sursock was the beating heart of Beirut's creative community. The country's only modern art museum, it has a collection of Lebanese art dating back to the late 1800s. 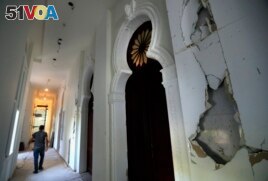 A worker walks in a corridor of the Sursock Museum that is still under reconstruction a year after being damaged in the massive explosion at the nearby port, in Beirut, Lebanon. The art collection was badly hit. (AP Photo/Hussein Malla)

The explosion not only damaged the Sursock; it also damaged many independent, small art spaces.

But for the Sursock, the blow was especially hard. This is because in 2015, the museum completed a nearly ten-year improvement project.

Zeina Arida is the museum's director. Describing the effects of the explosion, she used the term overwhelm, meaning to cause someone to have too many things to deal with.

"At the beginning we were overwhelmed with the reality and the extent of the damage," Arida said.

The explosion tore through the three-story building, breaking windows, pulling off doors and wrecking everything down to the fourth underground level.

The art collection was badly hit. At least 57 of the 130 pieces on display were damaged. Among them was Dutch artist Kees Von Dongen's painting of Nicolas Sursock, after whom the museum is named.

A year later, builders have put in windows, ceilings and doors and are now adding dividers and lights.

Maya Hussaini is the artist who worked on the stained-glass windows during the 2015 rebuilding project. She is now working to rebuild the windows.

"It has been very hard to see my work of 30 years on the ground, back to being sand ... But it is important to rebuild the museum," Hussaini said. "I had to go back to my archive to dig out my designs to bring it back to how it was."

An archive is a place where records are kept.

After the blast, there was strong support to help bring the museum back to life.

The Sursock was able to raise nearly 80 percent of the estimated $3 million repair budget. The money came from the French and Italian governments, the International Alliance for the Protection of Heritage in Conflict Areas, UNESCO, private donors and local groups.

Raising the money marked a major success for a country dealing with the explosion, coronavirus restrictions and an economic crisis.

Lebanon's economic crisis has been an especially difficult issue for the museum.

"It really has been two years that were very stressful, and the kind of challenges we are facing are evolving," Arida said. Before the blast, she had to reduce the museum's working days to save money as the economy fell apart.

The museum aims to reopen in the spring of 2022, even though the economic and security conditions remain unpredictable. In recent weeks, the museum has presented concerts and dance shows in its garden.

The explosion pushed many artists to leave Lebanon. Arida said there is a need for new programs and financing to provide jobs to those who stayed.

"We need to rebuild the whole sector. The museum without the other organizations, without... the surrounding heritage buildings would never be the same," she said.

Sarah El Deeb and Fay Abuelgasim reported on this story for the Associated Press. John Russell adapted it for Learning English. Bryan Lynn was the editor.

extent – n. the range, distance, or space that is covered or affected by something or included in something

stained-glass -- n. colored glass that is used to make pictures and patterns in windows

evolve – v. to develop or make something develop, usually over time