Update Required To play the media you will need to either update your browser to a recent version or update your Flash plugin.
By Gregory Stachel
23 July 2021


Traditional wooden boats, known as caique or kaiki, are an important part of Greek culture.

They have been used for centuries to fish and to transport goods, animals, and people. They are seen everywhere in printed materials for visitors and holiday pictures.

But the art of designing and building these wooden boats, completely by hand, is under threat.

To build a "caique," one person has to do all the work from cutting down trees and moving the wood, to securing each piece in place. The tradition is passed on from father to son or from one family member to another.

Now, fewer people are ordering wooden boats since boats made from materials like plastic and fiberglass are less costly to maintain. And young people are not as interested in joining a profession that requires years of learning with an uncertain future.

Giorgos Kiassos is one of the last remaining boat builders on the Greek island Samos. It was once a major boat production center. 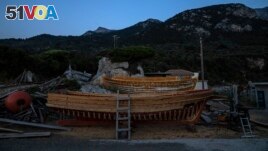 Kiassos is currently building two boats, one for pleasure and the other for fishing. While working, he said, "If something doesn't change, there will come a time when there won't be anyone left doing this type of job..."

"Unfortunately, I see the profession slowly dying," he added.

Caiques from Samos island are famous for both the quality of the work and the material. The wood is taken from a kind of pine tree that is stronger and more resistant to insects.

Years ago, there were many boat-building centers on the island. They employed many people and supported whole communities. Now, there are only about four left.

Kiassos said caique building is an art but the work is tough and tiring. He said young people are not following the profession. He tried to get his 23-year-old son to learn, but his son hopes to become a boat captain instead.

Why is the craft dying?

He said, "It is a traditional craft which is slowly dying, and yet it's treated as if it were a simple manufacturing or supply business. There is no support from the state."

On top of that, for years the European Union, of which Greece is a member, has supported destroying these boats as a way of reducing the country's fishing fleet. Damianidis questioned why a young person would want to learn the craft if the government is destroying the boats.

Another major reason for the fast-shrinking number of shipbuilders is the lack of any official learning process.

Damianidis said, "Young people have to go learn beside the old craftsmen, often for five years, six years, for them to be able to make a small boat, a kaiki, themselves." He added, "There is no boatbuilding school."

Help is on the way

Damiandis is setting up a new museum of Aegean Boatbuilding and Maritime Crafts on Samos. He hopes a traditional boatbuilding school, which would be Greece's first, will open in the museum.

That could also help the boatbuilders on Samos who now work mainly alone due to a shortage of skilled assistants.

"It's important to have someone experienced because if you make one mistake,... the boat might end up being — well, more of a basin than a boat," Kiassos said laughing.

After working for more than 30 years, Kiassos has learned the right time to cut down a tree, when to use naturally curved wood, and where on the boat each piece should go.

He explained if you get that wrong, the boat could end up with problems. Get it right, and his creation combines beauty, strength, and purpose.

Kiassos says he is ready to finish each boat and start on the next.

"But when it leaves, I'm somehow sad. Yes, I'll be happy when I see it in the water and I see everything is OK, but it's like something is leaving — like a piece of me."

Elena Becatoros reported this story for The Associated Press. Gregory Stachel adapted it for VOA Learning English. Hai Do was the editor.

craft –n. an activity that involves making something in a skillful way by using your hands

captain –n. a person who is in charge of a ship or an airplane

fleet –n. a group of ships or vehicles that move or work together or that are controlled or owned by one company

museum –n. a building in which interesting and valuable things (such as paintings and sculptures or scientific or historical objects) are collected and shown to the public

basin –n. a wide shallow usually round dish or bowl for holding liquids

curved –adj. having a rounded shape