Biden Warns Putin of Sanctions Over Growing Tension in Ukraine

Update Required To play the media you will need to either update your browser to a recent version or update your Flash plugin.
By Hai Do
07 December 2021

Russian television showed Biden at the White House and Putin at his home in Sochi as the meeting opened. Biden told Putin he hoped their next meeting would be in person. 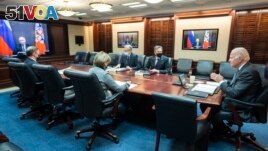 President Biden held a secure video call with President Putin of Russia to discuss a range of topics in the U.S.-Russia relationship, including U.S. concerns about Russian military activities on the border with Ukraine, Dec. 7, 2021. (Courtesy: White House photo)

White House officials say Biden told Putin that the United States and its allies are concerned that Russia will invade Ukraine. The officials say the American leader also warned of "strong economic and other measures" as punishment should Moscow start a military conflict.

Biden expressed continued U.S. support for Ukraine's independence and territorial control, the White House reported. And, it said, he called for a decrease in aggression and an increase in diplomacy.

Both sides say they hope the two leaders can hold an in-person meeting to discuss ties between the two nations. The U.S. and Russia have long disputed several issues including the war in Syria, American economic restrictions and reported Russian cyber attacks on U.S. companies.

The Russian government issued a brief statement after the call.

"Talks between Vladimir Putin and President of the United States Joseph Biden took place via videoconference," it said.

U.S. officials said before the video conference that Biden would tell Putin that Russia and its banks could be hit with the strongest sanctions yet if it attacks Ukraine.

One source said such measures could target Russia's biggest banks and Moscow's ability to convert rubles into dollars and other monies. The threat is hoped to dissuade Putin from attacking Ukraine with the tens of thousands of Russian troops on its border.

Before the meeting, Putin's spokesman said, "We're looking for good, predictable relations with the United States. Russia has never intended to attack anyone, but we have our concerns...."

Russia has long objected to American and allied military aid to Ukraine. It also has demanded that Ukraine not be admitted as a member of NATO.

In a statement released just hours before the leaders' video call, Ukrainian officials accused Russia of sending tanks and soldiers into eastern Ukraine. The statement said Russia was trying to incite a gun battle.

Russia has not commented on the accusation.

The roots of the conflict

Ukraine was ruled by surrounding countries including Poland, Lithuania, and others through the early part of its history. It became part of the Russian empire and then the Soviet Union for many years. The country won independence in 1991 following the breakup of the Soviet Union.

In 2014, Ukrainian President Viktor Yanukovych rejected an agreement with the European Union in favor of closer ties with Russia. The decision brought mass protests leading to his ouster. Russia reacted by taking over Crimea and supporting separatist rebels in eastern Ukraine.

Ukraine and Western allies accused Russia of sending its troops and weapons to back the rebels. Russia denied the accusation and said Russians who joined the separatists were volunteers. More than 14,000 people have died in the fighting.

A 2015 peace agreement helped end major battles. But efforts to reach a political settlement have failed. And clashes have continued at times along the line of contact.

U.S. intelligence officials last week said that Russia is planning to deploy an estimated 175,000 troops. They said almost half of them are already stationed near Ukraine's border in preparation for a possible invasion that could begin as soon as early 2022.

Ukraine's defense minister told lawmakers last Friday that the number of Russian troops near Ukraine and in Russian-occupied Crimea is estimated at 94,300. He warned that a "large-scale escalation" is possible in January.

The Ukrainian military says that Russia already has about 2,100 soldiers in the rebel-controlled eastern area. And the Russians also act as commanding officers in the separatist forces.

Russia has repeatedly denied the presence of its troops in eastern Ukraine. It also says that troop deployment on its territory should not concern anyone.

What does Russia want?

Russia has accused Ukraine of failing to honor the 2015 peace deal that was supported by France and Germany. The agreement requires Ukraine to give autonomy to the separatist-controlled areas and offer amnesty to the rebels.

Russia has strongly criticized the U.S. and its NATO allies for providing Ukraine with weapons and holding joint military exercises. It says the moves encourage Ukrainians to try to regain the rebel-held areas by force.

Putin has opposed Ukraine's desire to join NATO and expressed concern about plans by some NATO members to set up military training centers in the country. He charged that "the threats were mounting on our western border," with NATO placing its military operations closer to Russia. He offered to talk about the issue, adding that Russia would need "legal guarantees."

Is the threat of invasion real?

Russia says talk of a Russian invasion is a rebel attempt to hide Ukrainian intention for an attack in the rebel-controlled area. Ukraine denies such a plan.

Some observers see the troop buildup as a demonstration by Putin to persuade Western nations to stop sending troops and weapons to Ukraine.

Last month, Putin noted that Russian warnings finally have caused a "certain stress" in the West. He added: "It's necessary to keep them in that condition for as long as possible so that it doesn't occur to them to stage some conflict on our western borders that we don't need."

Hai Do adapted this story for Learning English with reporting from The Associated Press and Reuters. Caty Weaver was the editor.

intend - v. to plan or want to do something

empire - n. a group of countries that are controlled by one ruler or government

autonomy - n. the power to govern itself

amnesty - n. a decision that a group of people will not be punished