Update Required To play the media you will need to either update your browser to a recent version or update your Flash plugin.
By Jim Dresbach
14 March, 2016


Dozens were killed and wounded in an explosion near the main square of Ankara on Sunday.

At least 37 people were killed and 125 people were wounded and treated at hospitals around the Turkish capital.

"Thirty people were killed on the spot and four others died in hospital," said a member of Turkey's health ministry. During the late night, three more people died at medical centers. 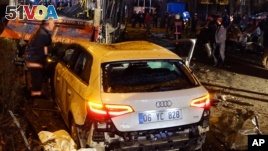 Security and medics at the explosion site in the busy center of Turkish capital, Ankara, Turkey, Sunday, March 13, 2016. The explosion is believed to have been caused by a car bomb that went off close to bus stops.

The explosion took place near Kizilay square near foreign embassies and government buildings. It was the third bombing in the capital during the past six months.

An Interior Ministry official said the blast was caused by a car bomb. The bomb was set off between buses to cause greater injuries and deaths, he said.

Another government official in Turkey told the Associated Press that police said the attack was carried out by two bombers. Police think one of the bombers was a woman. Police suspect Kurdish militants.

There has been no claim of responsibility for the violence.

The attacks targeted the Kurdistan Workers Party, or PKK. That news came from the state-run Turkish news agency.

President Recep Tayyip Erdogan said the fight against terrorism will continue, and his country will defend itself from attacks.

PKK has fought a 30-year guerrilla war against Turkey. PKK wants more autonomy for the Kurds in southeastern Turkey.

The Islamic State group has been blamed for bombings in Turkey. IS was blamed for a suicide bombing at a peace rally in October.

VOANews.com reported on this story. Jim Dresbach adapted the report for Learning English. Kathleen Struck was the editor.

square - n. an open place or area formed at the meeting of two or more streets

on the spot - expression at exactly the right time or place

state-run - adj. operated by the government

rally – n. a protest ; a public meeting to support or oppose someone or something

autonomy – n. the power or right of a country or group; to govern itself