Update Required To play the media you will need to either update your browser to a recent version or update your Flash plugin.
By Bruce Alpert
13 March, 2016


A Florida gun-rights supporter remained in the hospital Friday three days after she was shot by her 4-year-old son.

Jamie Gilt, 31, was shot in the back while driving her pickup truck on Tuesday, police said.

A Facebook page, listed under Gilt's name, included this message one day before Tuesday's shooting:

"If someone breaks into my house, or tries to harm me or my family pretty (much) anywhere, they will be shot and most likely killed. It's my right to protect my life."

The Facebook page also included this comment about teaching children how to shoot. "All of ours know how to shoot, too. Even my 4 year old gets jacked up to target shoot with the .22."

A .22-caliber gun gets its name from the type of ammunition it uses. Police said Gilt was shot by her son with a .45-caliber gun. Police said the gun was obtained legally. 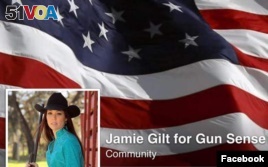 A Facebook page for Jamie Gilt for Gun Sense was taken down after its owner was shot in the back by her 4-year-old son.

The pro-gun rights Facebook page has been taken down. VOA could not confirm that the Facebook page, listed under "Jamie Gilt for Gun Sense," belonged to Tuesday's shooting victim.

Other news organizations were reporting that it is Gilt's site and that the comments on the site were hers.

The Putnam County (Florida) Sheriff's Department released a statement on the shooting. It said the gun used in Tuesday's shooting was taken by the 4-year-old without his mother's knowledge.

"Detectives have not been able to interview the victim and any decision on the filing of criminal charges will not come until after we speak with the victim," the sheriff's department said.

The victim's 4-year-old son is being cared for by relatives, the sheriff's department said.

On Thursday, the Associated Press reported that Gilt was in stable condition at a Florida hospital.

VOANews reported on this story. Bruce Alpert adapted the report for Learning English. Kathleen Struck was the editor.

jacked up – v. to be excited

obtain – v. to gain possession of something, usually by making a purchase or a gift

caliber – adj. a kind of bullet

interview – v. talking to someone in order to ask questions and get information

stable – adj. not getting worse or likely to get worse