Update Required To play the media you will need to either update your browser to a recent version or update your Flash plugin.
By Robert Carmichael
13 October, 2015


The minimum wage for the Cambodia's garment sector will rise to $140 a month, the Cambodian government said last week.

The new rate is almost 10 percent more than the current pay rate. Business owners wanted a lower increase. Unions asked for $160 a month.

The new pay rate will apply to 700,000 workers in January 2016. The clothing, textile and apparel industry exports more than any other economic sector in Cambodia. 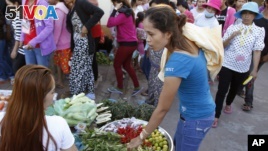 Garment workers now earn $128 a month. The government, manufacturers and unions talked for weeks before the agreement.

The Garment Manufacturers' Association in Cambodia, or GMAC, represents 600 factories that export garments and shoes. Ken Loo is the secretary-general of GMAC. He says the association must accept the government's decision.

The GMAC wanted a lower pay rate. They want buyers to pay more for the goods sold from Cambodia. The manufacturers are afraid investors will go to other countries.

"... we have to abide by the decision of the government. However,... if the buyers continue to pay lip-service or continue to be hypocritical about actually raising their prices that they are paying to the factories here, then we will see more factory closures, we will see less new factories or new investors coming to Cambodia, and this is a fact."

News media report that most unions, including those that agree with the government, have approved the new deal. At least two unions, however, have not agreed.

Ath Thorn heads one of those unions: the Cambodian Labor Confederation. It says that it has about 70,000 members. Mr. Thorn says his union will continue to ask for $160.

In the coming weeks the union will listen to the opinions of its members. Then union leaders will make a decision on whether or not to strike, or stop working.

The government made the final decision to increase the minimum wage.

After agreeing on $135, Cambodia's Prime Minister Hun Sen ordered another five dollars a month be added to that, bringing the total to $140.

The increase made by the prime minister was not a surprise. He did the same thing last year. His action shows the importance of the minimum wage issue in Cambodian politics.

The ruling party must keep two groups happy: voters and investors. The garment sector workers are a large part of the 10 million voters in Cambodia.

Hun Sen's party came close to losing the 2013 general election. The next general election is scheduled for 2018. The party knows it must improve its image among garment workers. Most of the workers are young women whose wages support families living in rural areas. They traditionally support the opposition party.

The garment manufacturing industry is crucial to Cambodia's economy. It is the largest employer and the main source of money from outside the country. Most exports are to the United States and the European Union.

Workers in Cambodia make products for many well-known Western brands, such as H&M, Adidas, Gap and Armani.

The image of the garment industry has suffered in recent years because of labor arguments and the bad treatment of independent unions. The lowest point was in early 2014 when Cambodian authorities shot dead at least five workers during fighting over the minimum wage and working conditions.

wage – n. an amount of money that a worker is paid based on the number of hours, days, etc., that are worked

garment – n. a piece of clothing

export – v. to send a product to be sold in another country

hypocritical – adj. a person who claims or pretends to have certain beliefs about what is right but who behaves in a way that disagrees with those beliefs

strike – v. of a group of workers: to stop work in order to force an employer to agree to demands; to refuse to work until your employer does what you want

Now it's your turn. What do you think of the increase in the minimum wage for garment workers? Would you pay a higher price for your clothes if you knew it would help pay a higher wage to Cambodian workers?