Neither Side Backing Down in Catalonia Independence Drive

Update Required To play the media you will need to either update your browser to a recent version or update your Flash plugin.
By Bryan Lynn
23 October, 2017


Both sides in Spain's dispute with Catalonia are standing firm as Spanish lawmakers prepare for a vote on suspending the area's rights to self-rule.

Spain's national Senate is set to vote Friday on whether to enforce direct rule in Catalonia. The government has already put in effect constitutional powers to dismiss Catalan officials and call an election.

One pro-independence party is calling for "mass civil disobedience" across the area to answer the latest Spanish moves. The CUP party has called the central government's actions "an aggression" against all the people of Catalonia.

Pro-independence students called for a strike at Catalan universities on Thursday to urge officials to move forward with a declaration of independence.

Catalonia has long sought independence from Spain. The area held an independence referendum on October 1. Catalan leaders say the results gave them a clear mandate to declare independence. 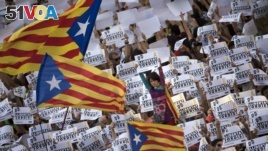 Protesters hold signs reading 'Freedom for the two Jordis' during a march to protest against the National Court's decision to imprison civil society leaders, in Barcelona, Oct. 21, 2017.

Spain's government and Constitutional Court declared the referendum illegal. Independence movement leaders said more than 90 percent of those who voted supported independence. Yet only about 43 percent of registered voters took part in the election.

Several hundred Catalan government officials oppose direct rule from the central government in Madrid. They have asked the area's parliament to vote on a measure rejecting the move. Some teachers and firemen working in the area said they would not recognize Spain's direct rule.

A group of Spain's political parties chose 27 senators on Monday to study how the government might intervene in Catalonia. The special commission includes 15 members of Spanish Prime Minister Mariano Rajoy's ruling Popular Party. Six senators were from the leading opposition Socialist party, with smaller parties sharing the rest.

Among possible constitutional measures the group will study is one calling for dismissal of Catalonia's government, led by the pro-independence governor Carles Puigdemont. The commission is expected to inform Puigdemont of its plans and invite him to defend his case before Friday's vote in parliament.

The Catalonia crisis has led to concerns across the European Union. EU officials fear that similar pro-independence movements could develop in other areas.

On Sunday, two of Italy's wealthiest areas - Veneto and Lombardy - held their own autonomy referendums. The presidents of both areas said more than 90 percent of those who marked ballots wanted more autonomy from the Italian government. 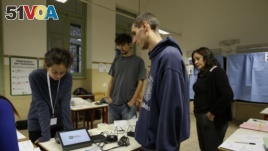 Carlo Andrea Carnevale Ricci, president of a voting section, checks the electronic voting operation system with a technician, left, at the Berchet School polling station, in Milan, Italy, Saturday, Oct. 21, 2017. It is greater autonomy, not independence,

Results of the voting were non-binding. But the presidents say the voices of the people will give them more power when officials begin talks with Italian Prime Minister Paolo Gentiloni.

Leaders of both regions want to keep more tax money and have a greater say over local education, immigration, security, and the environment.

Bryan Lynn wrote this story for VOA Learning English. His story was based on reports from VOA News, the Associated Press, Reuters and Agence France-Presse. George Grow was the editor.

We want to hear from you. Do you think the people of Catalonia have the right to break away from Spain? Write to us in the Comments section, and visit 51VOA.COM.

referendum – n. election in which the people in an area vote for or against an issue of public concern

mandate – n. the approval of a large part of the population

commission – n. official group of people chosen to study something and decide what they think should be done about it

autonomy – n. existing or acting separately from others

non-binding – adj. not able to be enforced by law