Chama - A Driver of the Non-Formal Economy in Kenya

Update Required To play the media you will need to either update your browser to a recent version or update your Flash plugin.
By VOA
20 July, 2015


Editor's note: Rose Njoroge, an English teacher at Gachie High School, Kiambu County, Kenya, wrote this story after taking the VOA Learning English online course, "Writing for the Internet" at the American Resource Center in the U.S. Embassy in Nairobi, Kenya. Her story is the second place winner of the contest sponsored by the embassy and VOA Learning English.

Chama is the term used in Kenya to describe self-help groups. Over the years, many Kenyan women have formed chamas. Members contribute an agreed amount of money with the aim of helping each other grow economically and possibly achieve financial independence.

The groups are started informally and many are driven by the members' desire to belong. Almost every Kenyan woman is a member of at least one or two chamas. The groups may consist of former classmates, colleagues at work, neighbors, friends and relatives. Chamas have given the women increased social support at times of need.

Membership is usually determined by each individual chama, in accordance with the purpose for which it was established. Some chamas are formed out of the necessity to uplift the economic status of members, while others are just an avenue for social activities. 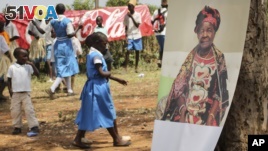 A poster of Sarah Obama, the step-grandmother of President Barack Obama, is displayed during a groundbreaking ceremony for her Mama Sarah Obama Foundation charitable organization, in her home town of Kogelo, near Kisumu, in Kenya Saturday, July 18, 2015.

Initially, rural women joined in order to help each other to buy utensils, water tanks, livestock and even roofing sheets. Members would contribute as little as 20 Kenyan shillings, which is about 20 cents in U.S. dollars. The chama saves this until it is enough to buy whatever each member desires, one person at a time.

From humble beginnings, some groups have grown into savings and credit cooperative societies or microfinance companies. Others have invested in real estate ventures.

In recent years, the government has taken steps to oversee the growing number of chama groups. The Department of Social Services in the Ministry of Labor now has the responsibility of registering and regulating them.

To be registered, a group has to have a constitution, minutes of the meeting authorizing registration, and a list of elected officials. A list of the members, with copies of their identity cards, and evidence of registration fee payments are also required.

Once a group is duly registered it can proceed to open a bank account and transact business. However, the majority of chama still operate informally, where members are only interested in a system called "merry-go-round." This is where money is collected and given out to one or more members. This process is repeated until all members get their share; hence, the term merry-go-round.

Some groups use a concept known as "table banking" when distributing money. Table banking is similar to the merry-go-round. The only difference is that the money contributed by the members is not given to one person. What happens is that the money is collected and then members take loans until all the money is used up. Each member agrees to pay back her loan with interest rates varying from 10 to 20 percent, depending on what the group decides. This way, the money keeps growing and more money is available for members to borrow every time.

Government officials and others have taken note of the huge potential of chamas. They are warming up to partner with them to 'jumpstart' various projects. Two table banking programs help chamas set up a small loan funding strategy. They are the government-operated Poverty Eradication Commision and the non-profit program, Joyful Women Organization.

Some banks have developed products to entice chama members to deposit their money with them. In turn the banks extend credit with easier repayment terms specifically tailored to chamas.

The government has also established programs such as the Women Enterprise Fund, WEF. The programs give loans to women's groups with 10 or more members.

The amount of money extended by WEF ranges from 100,000 Kenyan shillings to 500,000 Kenyan shillings (about $1,000 to $5,000 US dollars.) The loan is payable within a year upon which groups qualify for another loan. Borrowers who fail to repay their loans are blacklisted by the Credit Reference Bureau. They cannot access credit from other lending organizations.

Beth Gichohi, a field officer in Kiambu District in central Kenya, says that there are currently 251 active chamas in Kiambaa that have benefited from government funding.

These groups operate small businesses, such as kiosks, farming and matatu operations, among others. However, there are other groups operating informally.

Ms. Gichohi says increased lending is a good indicator of the desire people have to improve their lives. Her wish is to see many more groups benefit from the funding.

Teresa Maina, chair of a women's self-help group in Kiambu, indicates that her group has achieved much over the past five years. She says its 65 members have managed to buy a two-acre plot and shares in the Nairobi Stock Exchange.

She adds that her chama assists members when they are sick or bereaved. They organize baby showers for young mothers in the group, present wedding gifts to children of members, and have a program to assist the needy, orphans and widows. They also extend loans to the members.

Ms. Maina says her chama is governed by a written constitution and set of rules. Its members must adhere to the regulations, attend meetings, and adhere to the scheduled time of the meetings, she says. All contributions must be handed in before 5 p.m. on the day of a scheduled meeting. The group meets once a month.

With proper structures, chamas can be used to support sustainable development even in the most remote areas in Kenya. Yet chamas come with challenges. Managing groups in informal set-ups is a huge task. Handling large amounts of money can sometimes create problems. So can having non-professional personnel keep financial records. And then there is the issue of defaulters - those unable to repay loans.

Men have not been left behind. Some have set up organizations similar to chamas. They attract a large following because they are purely commercial. These groups are known as investment clubs.

There is no doubt that the chama movement plays and will continue to play an important role in the economic lives of Kenyans.

duly - adv. in the proper or expected way

transact - v. to do (business) with another person, company, etc.

tailor - v. to make or change (something) so that it meets a special need or purpose

blacklist - v. to say that a person, company, etc., should be avoided or not allowed to do something

bereaved - adj. sad because a family member or friend has recently died

Now it's your turn. Are there similar cooperative organizations where you live? Write to us about your experiences with them in the comments section.