Update Required To play the media you will need to either update your browser to a recent version or update your Flash plugin.
By Jim Dresbach
19 January, 2016


Christians and Muslims in Cameroon offered protection to each other following five attacks on mosques by suspected Boko Haram fighters.

Christians guarded mosques and Muslims protected churches after a fifth mosque was attacked by a male suicide bomber on Monday. The attack took place near Cameroon's border with Nigeria.

The development marked a change in Boko Haram operations. In the past, the terror group attacked churches, schools and markets. Now, Boko Haram is attacking mosques. 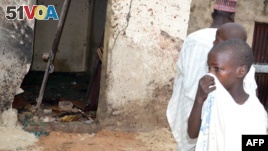 A child covers his nose inside a mosque where a suicide bomber killed over 20 worshipers in Maiduguri, Sept. 21, 2015.

Most groups assist government troops against the increasing attacks by Boko Haram. The Nigerian terrorist group has been active in Cameroon for three years.

Christians told VOA News they help Muslims for the well-being of the country and as a duty of faith.

Cameroon officials said militants have attacked mosques after being attacked by Cameroon and Nigerians soldiers.

In Mozambique in Africa's southeast, citizens are fleeing clashes between rebels and government forces. They seek asylum in neighboring Malawi, a U.N. refugee agency reported.

The agency says its staff registered about 1,300 new arrivals near the Malawi-Mozambique border. More than 900 refugees are waiting to be processed.

A United Nations spokesman said most of the refugees are women and children.

The fighting in Mozambique started last year. A previous civil war between 1977 and 1992 forced 1 million people from Mozambique to flee to Malawi.

Moki Edwin Kindzeka and Lisa Schlein reported on this story for VOANews. Jim Dresbach adapted their stories for Learning English. Kathleen Struck was the editor.