With a civil war raging in Syria, Lebanese security forces are busy guarding the country's borders. So busy, in fact, that for the past three years, there has not been enough troops for regular raids on illegal crop farmers. As a result, cannabis farms have flourished in the fertile Bekaa Valley in east Lebanon. It is in this area that the cannabis plant is squeezing out less valuable crops such as wheat, barley and vegetables.

Cannabis. Marijuana. Pot.
The spiky-leafed plants are the source of cannabis resin, known as hashish. It is a substance that is much in demand by recreational drug makers worldwide.

Not only is it in demand, it is easy to grow and does not need much water. Ali Nasri Shamas says he makes much more money growing cannabis than growing any other crop. He is prepared to fight for his fields.

Cannabis is an illegal crop in Lebanon. The government has raided farms, destroyed fields and imposed penalties. Officials in Lebanon's Drug Enforcement Unit say that from the 1990 until the 2012, getting rid of cannabis was a yearly thing. This has not been the case since the beginning of Syria's war, more than three years ago. They simply do not have the resources. A man works in a field of cannabis in Lebanon's Bekaa Valley.
Bekaa Valley farmers always have resisted government efforts to get rid of the marijuana plant. Now they openly talk about plans to expand its production. And it is not just the farmers who like this idea. Some economists say the government would benefit from making cannabis legal like tobacco, because it could collect taxes from cannabis growers. They say that exporting cannabis to the U.S. and Europe would add as much as $2 billion to the Lebanese economy. 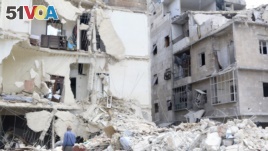 A man stands amidst rubble at a damaged site hit by what activists said was an air strike by forces loyal to Syria's President Bashar al-Assad. June 3, 2014. (REUTERS/Mahmoud Hebbo)
Last year when fighting on Syria's border increased, Lebanese officials quietly stopped their policing of cannabis farms.

This report was written by Zlatica Hoke. I'm Christopher Cruise.

And I'm Anna Matteo. Join us again tomorrow for another As It Is! And look for us on Facebook, iTunes, Linkedin and Twitter.

What do you think about farmers growing cannabis, an illegal crop, to make money? Should the crop be legalized? Let us know in our comment section where you can share your opinions and discuss the issue with other listeners.
Related Articles
go top