Update Required To play the media you will need to either update your browser to a recent version or update your Flash plugin.
By Dan Novak
14 August 2022


Degrowth economics is the idea that the planet cannot survive endless economic growth. That idea goes against modern economics, where growth is widely considered the best way for nations to build wealth.

But the theory is becoming more accepted. Climate change continues to worsen and supply shortages are giving people a taste of a world with limited resources. The problems have led some economic experts to consider what a degrowth world might look like. 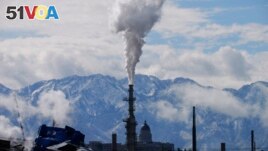 The term has also started to appear in investment notes.

"It is a provocative term," said Aniket Shah. He is with the investment banking company Jefferies. "But it's not about going to a low-income country saying, 'You can't grow anymore'," he said. "It's saying: We need to look at the entire system and see how do we over time decrease total consumption and production in aggregate."

The World Economic Forum, the organization that runs the Davos economic meeting, published a degrowth article in June. The article suggested that "it might mean people in rich countries changing their diets, living in smaller houses and driving and traveling less."

He said that the online meeting service Zoom, for example, is a company that could be considered degrowth.

"...I can certainly see how a world that uses more web-conferencing ... means less travel, which is a very high-carbon-intensive way of transportation," said Shah.

Some countries have tried to measure economic outcomes differently than just growth. The small Asian nation of Bhutan famously created a "gross national happiness" measurement. Japan is looking into creating a "green GDP" measurement. GDP, short for Gross Domestic Product, means the value of goods and services produced in a country.

But still, economic policy and markets are mostly driven by increasing consumption and production.

Tim Jackson is an economist who has long criticized that model. He said the pandemic and the Ukraine war both challenged consumption with other concerns, like health or global political goals.

At the same time, some countries could enter a state where their economies show little if any growth. This could be caused by many things like an aging population, limited international trade, or a lack of economic reforms.

Japan is a country that has experienced this. Experts also see it as a risk for Germany unless it quickly reforms its economic model.

"Particularly in the advanced economies we are moving into a situation where to all intents and purposes, we're pretty much not looking at continued growth already," said Jackson. "If we haven't got an economics that will deal with that .. then we've got very little chance of managing it successfully."

consumer — n. a person who buys goods and services

aggregate — n. thought of as a whole ; all together

conference — n. a formal meeting in which a small number of people talk about something

challenge — n. to test the ability, skill, or strength of

advanced — adj. far along in a course of progress or development