Climate Scientists: There Is Hope

Update Required To play the media you will need to either update your browser to a recent version or update your Flash plugin.
By Faith Pirlo
07 April 2022

Recently, however, many scientists are dealing with the feeling of doom about climate change or "doom-ism."

Jacquelyn Gill is a climate scientist at the University of Maine. She says that around 2018 she noticed an increase in these "doomers," or people who think that saving the earth is hopeless. They refuse to change their behavior or consider how they can work to prevent climate change. 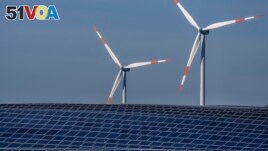 FILE -- Wind turbines turn behind a solar farm in Rapshagen, Germany, Oct. 28, 2021. The German government presented a major package of reforms to boost the construction of renewable power as part of its efforts to meet its climate goals. (AP Photo/Michael Sohn, file)

She explains that "doomism" is, "... a way of saying 'I don't have to go to the effort of making changes because there's nothing I can do anyway.' "

She spoke to The Associated Press with 6 other climate scientists. They say that even though there is increasing harm to our climate because of emissions, the situation is not hopeless. We can still prevent the worst effects.

The United Nation's Intergovernmental Panel on Climate Change (IPCC) recently published its third report. This report explained the damage caused by the burning of traditional fuels, like oil and coal. New investments in traditional fuels and removal of forests for farming are preventing the world from making changes to help stop climate change.

Inger Anderson is the Environment Program Director for the United Nations. She says officials are trying to get people to take action because there is a climate crisis. Their goal is not to scare people into doing nothing.

"We are not doomed, but rapid action is absolutely essential. With every month or year that we delay action, climate change becomes more complex, expensive and difficult to overcome," Andersen said.

The UN IPCC report stated that without fast and extreme measures to cut carbon pollution, the world is not likely to limit warming to 1.5 degrees Celsius. The global temperature has already increased by 1.1 degrees Celsius. After 1.5 degrees, climate change will quickly worsen causing environments to be in danger. It will cause an increase in weather disasters.

James Skea is a leader from the UN IPCC Report. "We don't fall over the cliff at 1.5 degrees. Even if we were to go beyond 1.5 it doesn't mean we throw up our hands in despair, " Skea said.

Michael Mann is a climate scientist at Pennsylvania State University. He says that scientists used to think Earth would continue to warm decades after we balance emissions. Balancing emissions to net zero means not creating more carbon in the atmosphere than oceans and forests can remove. New research suggests that it will only take a few years to decrease carbon levels in the air after we balance emissions.

"...by the time you're done, it's 'we're doomed' when what the scientist actually said was we need to reduce (our) carbon emissions 50 percent within this decade to avoid 1.5 (degree of) warming, which would be really bad. Two degrees of warming would be far worse than 1.5 warming, but not the end of civilization," Mann said.

Many of the people and companies that deny climate change cause people to think that nothing can be done.

One of the leaders of the climate doom movement is Guy McPherson.

McPherson is a retired environmental science professor. He lives simply without modern help, including money. He claims that climate change will destroy humans by 2026. But when speaking with The Associated Press, he said that the destruction of humans could occur around 2030 because of the loss of Arctic summer sea ice.

Jennifer Francis is a leader and senior scientist at the Woodwell's Climate Research Center. She said that even though the ice in the Arctic will be gone by 2050, McPherson is overstating the destruction.

People who live in the Arctic will see the most effects and everyone else will see faster warming and rising sea levels as well as intense weather more often.

We cannot prevent the Arctic ice from melting in the summer, but Francis says that many communities will adapt, and we can still prevent more disastrous situations from happening due to newer technology to help decrease emissions.

Seth Borenstein and Frank Jordans reported this story for the Associated Press. Faith Pirlo adapted it for VOA Learning English.

doom – n. a state of trouble or complete destruction in the future

emissions – n. gasses that are released into the atmosphere

expensive – adj. worth a lot of money

Celsius – adj. a temperature scale based on units of 10. Zero is freezing and 100 is boiling for water.

cliff – n. an area of high land that hangs over

despair – n. a very negative feeling of sadness and misery

What do you think about the warming of Earth and climate change? We want to hear from you. Write to us in the Comments Section.