Update Required To play the media you will need to either update your browser to a recent version or update your Flash plugin.
By VOA
14 July, 2018


Whether it is mathematics or history, almost everyone has at least one subject they find to be more difficult to understand than other subjects.

Some students may not be strong academically, lacking the skills they need to succeed in writing or taking tests. Others may have a learning disability or lack the study guides or other resources they need to support them in their learning.

But does that mean that a given person should not have the same chances as others to help themselves through higher education?

Scott Teichert says no. Teichert is the director of admissions at Weber State University, a public university in Ogden, Utah. He says his school and others like it were established with the idea that higher education should be open to all people. 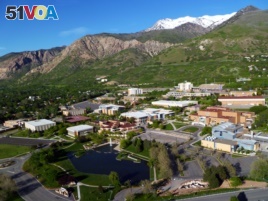 A view from above of the Weber State University campus in Ogden, Utah.

Most colleges and universities in the United States require applicants to provide records of their academic performance in high school. Students are also required to provide results of standardized tests, lists of their activities outside of school and letters of support from former teachers.

Schools then decide to admit applicants based on how well they have performed academically and whatever other qualities school officials desire in a student.

Millions of people seek entry to the higher education system in the United States every year. And with only about 4,600 colleges and universities nationwide, competition for admission can be intense.

Most applicants apply to more than one school to give themselves a better chance of gaining acceptance. In some cases, only the students with the strongest academic records or list of activities are admitted.

But Teichert argues that just because a highly selective school rejects an applicant does not mean that he or she is less intelligent. Nor does it mean the individual is less hard working or unworthy of higher education.

That is why some American states have established schools that use open enrollment in their admissions process, he says.

A school with open enrollment does not compare applicants in terms of their past academic performance. The main requirement is simply proof that an applicant has successfully completed an American high school-level study program or something that is equal to it. This shows that the person is academically ready for a college environment and willing to do the work required of them, says Teichert.

Why is it so simple to enter a school with open enrollment? Teichert suggests it is because almost all of these colleges and universities receive some kind of public money. So they have a responsibility to help people improve their lives and support themselves.

"They ... are built upon ... the idea that education is a public good," Teichert told VOA. "So ... open enrollment institutions ... want to make it affordable and accessible to as many students as possible."

Teichert notes that Americans might say community colleges do exactly that. After all, they are low cost, public schools with less selective admissions requirements. Yet community colleges only offer two-year degree programs. And many community college students start their higher education at these schools only to eventually move on to four-year institutions.

But many institutions with open enrollment offer four-year degrees, and some, like Weber State, even offer master's degree programs. These degrees are awarded after one or two years of additional study.

Teichert adds that open enrollment can be very helpful for international students. At schools like Weber State, the only other major requirement for admission is the results of an English language skills test such as the TOEFL.

However, applicants should not lead themselves to believe that simply because the application process is easy the study program will be, too, notes Teichert.

Open enrollment institutions are accredited in the same way selective schools are. This means the education they offer must be of the same high quality. And the students are expected to perform just as strongly as they would anywhere else.

At Weber State, for example, students who enter into a given field of study may be asked to change study programs if they show signs they are struggling.

Many of the colleges and universities in the United States are said to be among the best in the world. This is especially true of the eight highly selective, private institutions known as Ivy League schools. These eight have long been seen as offering the best education. Also, many people believe that having a degree from an Ivy League college or university would likely lead to them getting the best jobs.

So some people might ask that if one could possibly attend one of these schools, why consider a school that accepts almost anyone?

Teichert admits this is a fair question. But he argues that some of the professors at places like Weber State attended Ivy League schools themselves. As a result, they are able to share their Ivy League-level education with their students.

Also, he says, many employers care more about the kind of person they choose for a job than where that person went to school.

We want to hear from you. Are their schools which use an open enrollment-style process of admissions in your country? How do you people view them? Write to us in the Comments Section or on 51VOA.COM.

academically – adv. in a way that relates to schools and education

enrollment – n. the process of making someone a member of or participant in something

applicant(s) – n. someone who formally asks for something, such as a job or admission to a college

standardized test(s) – n. any form of testing that requires all test takers to answer the same questions, or a selection of questions from common bank of questions, in the same way, and that is scored in a consistent manner

selective – adj. careful to choose only the best people or things

accessible – adj. able to be used or obtained