Comedy Can Teach You About Grammar, Speaking

Update Required To play the media you will need to either update your browser to a recent version or update your Flash plugin.
By John Russell
25 June 2020


Jokes can not only challenge your ideas and make you laugh. They can also teach you about grammar.

Today on Everyday Grammar, we will show you how humor can help you with speaking, word stress, content words and function words. 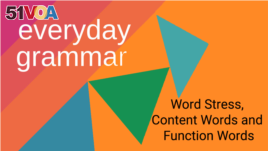 Dick Gregory had a long career as a comedian. Gaining fame in the 1960s, he was involved in comedy and civil rights issues in the United States.

Gregory continued performing late into his life. In the late 2000s, he recorded a special performance that dealt with politics, race and even the questions of journalists, such as reporters from The Associated Press and CNN. Let us listen to part of it.

"I came back in from Europe last month..."

I ain't looking for him.

I'm still trying to find out who my daddy is."

Now, let's think about each of these lines.

I came back in from Europe last month.

Let's listen to the next line from the recording:

In this question, Gregory tells what the journalist asked him. Note how he stressed the content words. He seemed to call attention to the nouns Bin Laden, Mr. Gregory, and CNN. He also stressed the verbs think and catch and the adverb ever.

He wants to make clear that he is not part of the "we" that the journalist is talking about. He then says the following:

I ain't looking for him.

Note that he does not stress the pronoun him.

But he does stress the word ain't. This is a casual kind of negation. It is short for the words am not. Although Americans generally do not stress auxiliary verbs, in cases of negation, Americans sometimes stress them - especially if they want to show that they have a different opinion.

In the next line, Gregory makes the surprising claim that he still does not know who his father is. Ask yourself: Which words does he stress?

I'm still trying to find out who my daddy is.

The next time you are watching the news or a comedy special on the Internet, listen to how the speaker stresses certain words. Over time, you will begin to note regular, repeated ways that English speakers stress words. And if they do something different from what you expect, then ask yourself why. And, hopefully, try to laugh and smile in the process.

challenge – v. to test; to compete against

grammar – n. the whole system and structure of a language

stress – n. the act of noting the importance of something

comedy – n. a play, movie, television program, or performance that is meant to make people laugh

negation – n. grammar to make (a word or phrase) negative

certain - adj. fixed or established; known for sure