Cuba Is Latest Nation to Restrict Social Media During Protests

Update Required To play the media you will need to either update your browser to a recent version or update your Flash plugin.
By Bryan Lynn
14 July 2021


Thousands of people across Cuba protested last Sunday in the largest anti-government demonstrations on the island in decades.

Shortly after the protests began, Cuban officials blocked access to social media sites including Facebook, Instagram, WhatsApp and Telegram. Such sites are often used in the organizing of political protests.

"This does seem to be a response to social media-fueled protest," NetBlocks director Alp Toker told The Associated Press.

Thousands of Cubans joined demonstrations in cities and towns across the Caribbean island on Sunday. They were protesting an economic crisis and the government's actions in connection with COVID-19. Some protesters called for an end to Cuba's communist political system. 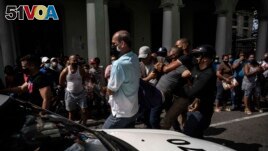 The country's problems have worsened since the United States increased economic and travel restrictions against Cuba during the administration of former President Donald Trump. In 2018, the United Nations estimated that America's longstanding financial and trade restrictions on Cuba had cost the country's economy $130 billion over almost 60 years.

The current economic crisis has led to shortages of food, medicine, and widespread power outages. In addition, a rise in COVID-19 infections and a lack of vaccines has pushed some hospitals to the edge of collapse.

Cuba's government accuses opponents in the U.S. of organizing the recent political uprising on the island. It also says the U.S. government finances their efforts.

Both anti-government protesters and government supporters took to the streets on Sunday. By Monday, no large crowds were reported, as security forces were deployed to the streets.

Many protesters had used their phones to capture images to send to others and publish online. But internet access was restricted during the protests and by Monday, the government was blocking most major social media sites except for Twitter, NetBlocks said.

One Cuban citizen discussed the situation over email with VOA Learning English Wednesday. The person asked not to be identified because of the sensitive nature of the issues discussed.

The emailer told VOA that internet access had returned in Cuba, but that the system was operating at a very slow speed. And, the person wrote, the only news and information currently available to the Cuban public is that provided by government-owned media.

The individual said the demonstrations were fueled by electricity cuts, shortages of food and medicines and long lines for buying basic necessities. The situation had gotten worse because of COVID-19 restrictions.

Internet access in Cuba has been costly and mostly rare until fairly recently. Cuba was "basically offline" until 2008, said Ted Henken, a Latin America expert at New York's Baruch College. He told the AP the biggest change came in December 2018, when Cubans got access to mobile internet for the first time. Today, more than half of all Cubans have full internet access, Henken said.

Since early 2019, this access has led to some smaller political events and protests being held on the island. In response, the government sometimes cuts access to social media. Henken says it does so mainly to hide its own repressive actions.

Gino Ocumares lives in Havana and spoke to Reuters as he tried but failed to connect to the web on his wireless device. "Our weapon is the internet. If they take away the internet we are unarmed," he said. "The government does not want people to see the truth."

Last year, the Ethiopian government shut down internet access across the country for three weeks following civil unrest. The shutdown in Ethiopia's Tigray area has continued for months. In Belarus, the internet went down for more than two days after a disputed election in August 2020 led to mass protests.

Major internet disruptions by governments have happened this year in Myanmar, Armenia, Uganda, Iran, Chad, Senegal and the Republic of Congo.

Bryan Lynn wrote this story for VOA Learning English, based on reports from The Associated Press, Reuters, VOA News and additional reporting. Caty Weaver was the editor.

disrupt – v. to cause something to be unable to continue in the normal way

respond – v. to say or do something as an answer or reaction to something that has been said or done

routine – adj. things that happen on a regular basis