When a dog loses a leg, the animal eventually figures out the best way to get around on three legs. In a short time, the dog learns deal with its physical disability.

Now, scientists have developed robots that behave in much the same way.

We can find robots everywhere. Robots build cars, play chess and can clean your house. They may someday drive your car, too. 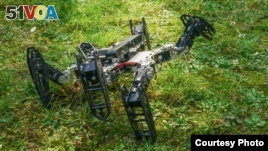 This robot, with a damaged arm, tests different responses using a trial-and-error algorithim and can learn to get up and keep walking in about a minute. (Credit: Antoine Cully/Pierre and Marie Curie University)

Two robots, named Spirit and Opportunity, were sent to Mars on a mission to explore the red planet.

Jeff Clune is a computer scientist with the University of Wyoming. He says robots also help people in natural disasters.

Robots are deployed in search and rescue operations following an earthquake. They may someday also be used to examine the wreckage of a nuclear accident, like the one in Fukushima, Japan.

Mr. Clune says robots can be sent to a lot of places said to be unsafe.

"The problem is that all of those types of situations and environment are extremely unpredictable and hostile. And it is very likely that robots and humans in those situations become damaged."

He and other scientists are developing technology so that robots will continue operating after the first sign of injury. They want the machines to have the ability to make changes and continue performing until they can be repaired.

Mr. Clune and researchers in France have added one more operation to the skill set of robots working under difficult conditions. They say they programmed a hexapod robot, one with six legs, and a robotic arm to learn how to deal with injury. Their findings were reported in the journal "Nature."

Mr. Clune said that once the robots become damaged, they use their intuition and knowledge of how their body works to find a way to deal with the damage.

He says the robots are also programmed with child-like curiosity. In other words, they are always asking questions and looking for answers. The whole process takes about a minute for the robots to find a way to overcome damage.

VOA's Jessica Berman reported on this story from Washington. Triwik Kurniasari adapted it for Learning English. George Grow was the editor.

figure out – v. to solve a problem

skill set – n. a number of skills or abilities

intuition – n. knowing or understanding something without any evidence or past experience

curiosity – n. the desire to learn more about something