Update Required To play the media you will need to either update your browser to a recent version or update your Flash plugin.
By VOA
07 June, 2015

Chinese investment in Australia has moved to the real estate market and infrastructure. It is yet another sign that Australia's once strong mining industry is weakening, as Chinese businesses look for new places to invest.

For the first time, almost half of all Chinese investment in Australia is in real estate. Spending on roads, bridges and other infrastructure has also increased. 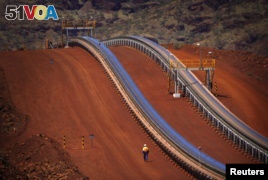 Less of this? China is investing less in Australia's mining industry and more in real estate. The picture shows a conveyor belt at an Australian iron ore mine.

The findings are contained in a report called "Demystifying Chinese Investment in Australia." It comes from accounting company KPMG Australia, the University of Sydney Business School and the China Studies Center.

Hans Hendrischke is a professor of Chinese Business and Management at the University of Sydney Business School. He says the study provides examples of what he calls new patterns of interest.

"The most striking feature was the change in Chinese investment composition – that is the shift from big projects in the mining and resources area to this huge increase in real estate, and other industries where the Chinese traditionally had not been too strong, such as leisure and construction. They have bought one of the biggest cinema chains in Australia and one of the two biggest construction firms, John Holland."

Australia's mining industry was expanding a few years ago. Now, the rate of growth appears to be slowing. Chinese companies with money to spend have looked to real estate as a place to invest. However, Australia's Foreign Investment Review Board must approve what properties the companies can buy.

Phil Harris is the managing director of Harris Real Estate in Adelaide. He says Chinese buyers are inflating prices in Australia's major cities.

"There is absolutely no question that it is having a dramatic effect on property prices in particular areas of both Melbourne and Sydney. I have colleagues who own real estate offices in both of those marketplaces, and in some of those markets they are seeing 80 percent of all purchases – now even 100 percent of purchases in certain areas are going to Chinese buyers. There is no question it is having an effect on property prices."

Last year, the Chinese invested $8.3 billion in Australia. The combination of real estate, leisure serves and infrastructure projects made up 79 percent of new Chinese business in the country. That compares with just 11 percent for mining.

While real estate is the most popular investment, there is growing interest, too, in Australian agriculture. Andrew Forrest got rich from mining businesses. He says Chinese investment is helping to increase the productivity of farming.

"So far, Chinese investment into Australia - agriculture - has been well received and they're capable of being a strong and passive partner in projects of massive scale which our capital alone could not develop."

The falling value of the Australian dollar has made investments in the country more appealing. Easing of Australian visa rules has also attracted investment.

Doug Ferguson is head of KPMG Australia's Asia Business Group. He co-wrote the report on China's investment in Australia. He says Chinese investment is good news.

"I think it is very important for our economy to be able to successfully move the structure away from mining, gas and power into sectors that have more, maybe, enduring long-term benefit to the broader economy, which I think real estate, which leisure and tourism and agri business (and) food offers, and that is exactly what is happening, so it is very good news."

China is the sixth largest foreign investor in Australia. The United States and Britain invest more, although Chinese spending is growing fastest.

The flow of money from China is a politically sensitive issue, especially purchases of real estate and farms. Last weekend, Australian nationalists demonstrated and burned flags near China's diplomatic offices in Sydney. They were protesting what they described as a "foreign invasion."

Phil Mercer reported this story for VOA News from Sydney, Australia. Mario Ritter adapted it for Learning English. George Grow was the editor.

state-owned enterprises – n. Businesses controlled (through a majority ownership share) or fully owned by a government

real estate – n. property such as buildings and land

patterns – n. a regular or repeated form or way something is done

scale – n. the level at which something is done relating to its size, number or frequency

purchase(s) – n. something that is bought; v. to buy something