Lawmakers Debate How to Deal with Free Trade's Results

Update Required To play the media you will need to either update your browser to a recent version or update your Flash plugin.
By Mario Ritter
30 May, 2015


The United States Senate recently passed a measure called Trade Promotion Authority. Under the bill, the Congress can only vote for or against a trade agreement once it has been negotiated. This ability to "fast-track" such agreements would be important when Congress considers possible trade deals with Asian and Pacific countries and also Europe.

But the issue of free trade can fuel a debate about U.S. jobs. Many labor unions and Democratic Party members support a little-known federal program for American workers. It is called the Trade Adjustment Assistance Program. It provides financial assistance to those who lose their job because of increased foreign competition. Conservatives say the program is ineffective and costs too much.

However, a former steel worker who spoke with VOA says the program works and should be expanded. Michael Smith worked at the Bethlehem Steel Mill in Sparrows Point, Maryland. The mill was once a major producer of steel. It employed as many as 30,000 Americans. Mr. Smith was a crane operator with Bethlehem Steel for 13 years. Recently, he returned to the grounds. 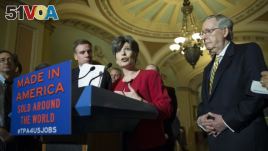 "I remember what this place used to be. I remember the sights, the sounds, the tractors. It's actually hard physically standing here. I mean, my heart hurts."

The mill closed in 2012 as a result of a series of business decisions and increasing global competition. That left Mr. Smith and 2,500 mill workers with no jobs and few marketable skills.

"I was blessed enough to find a program called TRA ((Trade Readjustment Allowance)) and TAA ((Trade Adjustment Assistance)), which is a union bargain benefit that was provided to us."

The TAA program gave Mr. Smith a weekly stipend. He used his retraining assistance to pay for books and school tuition fees. He recently completed his college studies and graduated with a bachelor's degree in Psychology.

Michael Smith's experience with the program was good. However, many conservatives say TAA is wasteful and ineffective. Dan Ikenson studies trade policies for the Cato Institute research group. He says that for every job lost to trade, 30 jobs are lost for other reasons. He spoke to VOA on Skype.

"They complain a lot about the dearth of skilled workers, and if they were incentivized to hire people just to train them in exchange for them agreeing to work, maybe for a year or two afterwards, that might work a lot better than trade adjustment assistance does."

The Senate voted to extend the 400-million dollar program as part of a fast-track bill to speed pending free trade deals with Pacific countries. The House of Representatives has yet to vote on the trade legislation.

Mil Arcega reported on this story for VOA. Additional material came from other VOA reports. Mario Ritter wrote it for Learning English. George Grow was the editor.

assistance – n. help or aid that is provided by someone or a group

global – adj. from around the world or having to do with the world

marketable – adj. able to be sold; something that others will want to buy or accept

adjustment – n. a relatively small change that makes something better

pending – adj. not yet decided on or acted upon