Update Required To play the media you will need to either update your browser to a recent version or update your Flash plugin.
By VOA
23 April, 2015


The social network Facebook reported that it now has 1.44 billion monthly active users (MAU) worldwide. That is 50 million more users than the population of China and over 188 million more than India's population.

Facebook also reported that 75 percent of its users access the site via mobile devices as of March 2015.

Despite its growing user base and accessibility via smartphones and tablets, Facebook's income dropped 13 percent over year-ago levels to $933 million. 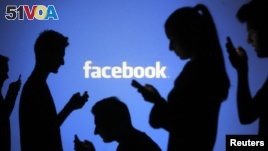 People are silhouetted as they pose with mobile devices in front of a screen projected with a Facebook logo, in this picture illustration taken in Zenica October 29, 2014.

That is likely a result of several factors, analysts say.

Over the last year Facebook has spent money to buy the photo-sharing Instagram app. It launched "Messenger" for users to communicate directly and added videos to the site to compete with YouTube.

Additionally, more than half of Facebook's revenue comes from nations other than the United States. For example, it is very popular in Indonesia. The recent rise in the value of the U.S. dollar may have cut into Facebook's overall profits.

In a statement to the media, Facebook co-founder and CEO Mark Zuckerberg called its quarterly report "a good quarter and a good start to the year."

Facebook launched to the public in December 2004 but had little growth in its first four years. Social media strategist Ben Foster calculates that Facebook has seen explosive growth since April of 2009.

"The strong growth in Mobile MAUs tells me that Facebook is becoming the first thing people go to on their mobile device," Foster told VOA via email. "If this trend continues, Facebook could easily become the primary source of traffic for publishers and companies. This could change the digital landscape for content, as the content we prefer to consume on mobile is quite different than content we prefer on a browser."

Much of Facebook's revenue comes from sales of ads that are tailored for users based on their Facebook activities and friends.

Earlier this year in March, the European Court of Justice – the EU's highest-such court – heard a complaint against Facebook. The social media site allegedly passed data from European users to the U.S. National Security Agency. This violates EU privacy protections.

Despite privacy concerns, analyst Foster says the numbers suggest people actually like the product, and the number of users will grow.

"For Facebook's reach, if they are the best at delivering content, then they will continue to get more users which will continue the cycle," he said.

Doug Barnard reported this story from Washington. Hai Do adapted it for Learning English. Jim Tedder was the editor.

accessibility – n.; accessible adj. able to be reached or approached

factor – n. something that helps produce or influence a result

quarterly report – n. (in finance) a financial report for investors that covers three months of the year and required of public company