Update Required To play the media you will need to either update your browser to a recent version or update your Flash plugin.
By Kelly Jean Kelly
19 April, 2015


Researchers have found tuberculosis bacteria in 200-year-old human remains. The researchers say the discovery is surprising. The remains came from a Hungarian church where wealthy Europeans were buried. Today, tuberculosis affects mostly poor people. The finding shows how the deadly lung disease has changed over time.

But the situation was different in Europe 250 years ago. The researchers found that in the 18th century, wealthy Europeans also suffered from TB. Sometimes the Europeans even had more than one kind of the disease.

A report in the journal "Nature Communications" describes the findings. It says the researchers examined the remains of 26 people. Their bodies were kept at the Dominican Church in Vacs, Hungary. The remains were mummified – that is, they had not broken down.

The researchers say 8 of the 26 bodies had signs of tuberculosis bacteria. In fact, researchers were able to identify 14 different TB genomes among the remains. Five of the mummies were infected with more than one kind of TB.

One of the researchers was Mark Pallen. He is with the University of Warwick in Britain. He says the new evidence shows people in the 18th century often suffered from several different strains of TB. 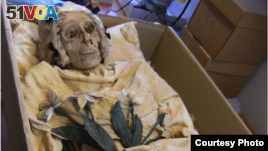 For example, he says, researchers discovered a mother and daughter who were both infected with many TB strains. He says they may have passed the disease to each other.

The discovery makes researchers believe that many people across Europe suffered from TB. The disease spreads easily through a population.

Mr. Pallen says the discovery may make doctors think differently about tuberculosis. Researchers today usually expect patients to have only one kind of TB.

"I don't think I can claim single-handedly to have changed the field in any way. But it's just changing the way people think, and it's just making people think more carefully about assumptions about what we do at the moment."

Today, researchers say a number of TB infections have been discovered in South Africa, where many people have the virus that causes AIDS. Being infected with more than one strain of TB makes treating the disease difficult.

Mr. Pallen's team studied changes in both old and new TB bacteria samples. He says their research suggests a common ancestor for the current bacterium existed nearly 6,000 years ago -- as far back as ancient Rome.

mummified – adj. keeping something from breaking down, for instance, by using oils or heat

genomes – n. the genetic material that describes the qualities of an individual

samples – n. a group taken from a larger group to get information