Update Required To play the media you will need to either update your browser to a recent version or update your Flash plugin.
By Jonathan Evans
18 April, 2015


Around the world, people are excited for the 2016 Summer Olympic Games. The host city for the events is Rio de Janeiro, Brazil. The city is known as Cidade Maravilhosa – the Marvelous City – because of its beautiful landscapes.

But one body of water in Rio, Guanabara Bay, is not so marvelous. The bay is known for having very polluted waters. The area is filled with raw sewage and trash, from empty water bottles to household furniture floating in the waters.

Guanabara Bay is also the location of the sailing events for the 2016 Olympic Games. 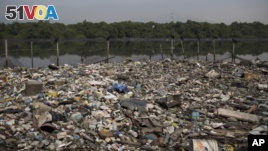 In this May 15, 2014 photo, trash floats on a polluted waterway that flows into the Guanabara Bay in Rio de Janeiro, Brazil.

The organization would have received $6.3 million to help remove waste from the competition areas. Workers would use what are called eco-boats to pick up floating trash.

Andre Correa is the environmental secretary for the state of Rio de Janeiro. He released a statement saying he was disappointed with the decision by Instituto Rumo Nautico.

"The priority now is to create an emergency plan to clean up the area where the Olympic sailing events will be held," he said.

Cleaning up Guanabara Bay has been a goal of government officials for many years. But little progress has been made. Hundreds of millions of dollars have been spent on cleanup projects going back more than 20 years. Few observers believe the situation will improve before the 2016 Olympic Games.

Some famous sailors worry that competitors might become sick from the spray of the sewage-filled waters. They also worry about possible dangerous boat collisions with floating couches or refrigerators.

Officials in Rio say that the Olympic event route will be safe.

A test event is planned for August of this year. Andre Correa says that "no effort will be spared and we'll join forces so that this year's test event takes place within the expected (water quality levels), as last year's did."

But environmentalists say that the test event last year happened during high tide. Many of the pollutants and garbage were pushed out of the competition path. If the event takes place during low tide, they say, there may be dangerous consequences.

Jonathan Evans wrote this report for Learning English with materials from Reuters and the Associated Press. Hai Do was the editor.

environmentalist – n. a person who works to protect the natural world from pollution and other threats

high tide – n. the tide when the water is at its highest level

sewage – n. waste material such as human urine and feces that is carried away from homes and other buildings in a system of pipes

What do you think Rio de Janeiro should do to clean up Guanabara Bay? Write to us in the comments section.