US Seeks to Influence Changes in Cuba

Update Required To play the media you will need to either update your browser to a recent version or update your Flash plugin.
By Christopher Jones-Cruise
13 April, 2015


Secretary of State John Kerry says the United States has launched what he calls a "policy of transformation" with Cuba. He says the government is urging Cuban leaders to make changes that will help the Cuban people.

Secretary Kerry spoke to reporters on Sunday, the day after President Barack Obama met with Cuban leader Raul Castro. The two leaders shook hands and spoke in Panama, where they attended the Summit of the Americas. It was the first time U.S. and Cuban leaders have met in more than 50 years.

Secretary Kerry told ABC News on Sunday that U.S. economic sanctions on Cuba have not forced the leaders of the island nation to change. The sanctions were put in place soon after Fidel Castro seized power in 1959. 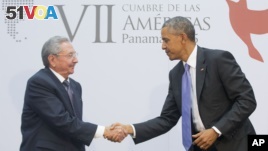 US President Barack Obama and Cuban President Raul Castro shake hands during their meeting at the Summit of the Americas in Panama City, Panama, Saturday, April 11, 2015. (AP Photo/Pablo Martinez Monsivais)

"(Our) belief is very powerful that, by beginning to engage, by beginning to have greater travel, greater ability to move, greater ability to visit, ideas and opportunities will grow, that the Cuban people themselves will have a greater opportunity for (freedom of) expression and for exchange of views, and that is what will promote a transformation over a period of time. But, we have to begin somewhere and the president has courageously decided to change a policy that hasn't worked."

Mr. Kerry told NBC News that he has spoken with Mr. Obama about whether Cuba should be removed from a U.S. list of countries that support terrorism. Cuba has demanded the removal. Mr. Kerry says he expects the president will make a decision about that in the next few days.

A leading member of the U.S. Senate is critical of the administration's new policy toward Cuba. New Jersey Senator Robert Menendez is also a member of President Obama's Democratic Party.

Mr. Menendez told Fox News on Sunday that the president is giving Cuba everything it wants and has received nothing to help the Cuban people. The senator's parents came to the United States from Cuba in 1953.

The father of Republican Senator Ted Cruz was born in Cuba. Senator Cruz has also criticized the administration's policy. In a statement, he said the president is "leaving the Cuban people imprisoned in the past."

"It's only held us back and made us look bad. Even among our allies in Latin America, there's quite a bit of skepticism, if not embarrassment, regarding US-Cuba policy. It's also a smart thing to do economically in that Cuba will be a good market for U.S. exports, particularly agricultural goods eventually, and getting started on the normalization process is a move in the right direction."

Ted Henken is a Cuba expert at Baruch College in New York. He notes that Raul Castro has said the Cuban government's policies will not change. But he says the Cuban leader admitted that no one really knows what will happen in years to come.

"He did also say – interestingly and surprisingly I thought -- during the conversation he had with Barack Obama that the things we may disagree on today, the world moves very fast and we may end up agreeing on tomorrow. I don't think that Raul Castro has become a democrat in his last three years in office; he said he's going to step down in 2018. But I do think that laying the groundwork now and looking towards the future is the right move, because it's not really about Obama and it's not really about Raul Castro, it's about the Cuban people, and I think this policy has a much better chance of helping them than, than our past policy."

Mr. Henken says the U.S. Congress could cancel the economic sanctions against Cuba before Mr. Obama leaves office in early 2017. But he says that will only happen if there are enough positive developments following the announcement that the two countries will reestablish diplomatic relations.

Victor Beattie reported this story from Washington. Christopher Jones-Cruise wrote it for VOA Learning English. George Grow was the editor.

sanctions – n. an action that is taken or an order that is given to force a country to obey international laws by limiting or stopping trade with that country or by not allowing economic aid for that country (usually plural)

engage – v. to give serious attention to (someone or something)

an exchange of views – idiom to tell one's beliefs, opinion or political views to others and then to hear theirs

promote – v. to help (something) happen, develop or increase

transformation – n. a complete or major change in someone's or something's appearance or form

skepticism – n. an attitude of doubting the truth of something (such as a claim or statement)

regarding – prep. (somewhat formal) relating to (something); about

in that – conjunction in the fact that; in the sense that; for the cause or reason that; because

particularly – adv. used to indicate someone or something that deserves special mention

lay the groundwork – idiom to create a foundation; to provide the basics or fundamentals

Do you believe the US should remove Cuba from its list of countries that support terrorists? We want to hear from you. Write your thoughts in the comments section.