Do You Believe in ‘Clairvoyance?'

Update Required To play the media you will need to either update your browser to a recent version or update your Flash plugin.
By Anna Matteo
21 September, 2019

On this program, we talk about the stories of ... words.

Did you know I was going to say the word "words"? If you did, you may be clairvoyant. Or you may have heard the show before. Or you simply read the name.

Anyway -- today we will talk about the word clairvoyance!

By definition, clairvoyance is the ability to predict future events. If you are clairvoyant, you know about things that you did not actually see happen or hear about.

Some clairvoyants even claim to be able to speak to the dead.

Psychics, palm readers and fortune tellers all say they have this power. Some turn to a crystal ball for their information. Others read tea leaves or depend on tarot cards. 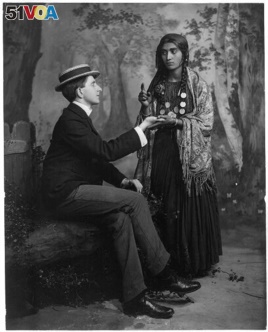 A woman reads a man's fortune in his palm. These types of psychics are called "palm reader." (Library of Congress Photo)

The Etymology Online website reports that the word "clairvoyant" comes from French and dates back to the 13th century.

Today we have others words that mean about the same thing.

One is sixth sense. Most people are born with five senses: hearing, sight, touch, smell and taste. We use our five senses to learn about and understand the world around us.

So, people with a "sixth sense" are believed to have an extra sense to perceive the world. This is called an extrasensory perception, or ESP, for short. ESP is a term we use to mean 'clairvoyance.'

We sometimes call this special ability second sight. People use their eyes to see the world around them. But those with "second sight" claim to see things that are not there or are yet to happen.

Now, some people may not believe that clairvoyants are real. They might say such people are just really observant. Others may believe that this is all nonsense. It makes no sense at all. They say clairvoyance or psychic abilities are not based in science and, therefore, do not exist.

Okay, now, listen to an exchange between two friends. One believes in clairvoyance; the other ... not so much.

A: Where have you been? I've been waiting for over an hour!

B: I am sensing that you are angry.

A: You kept me waiting! And I am yelling! It doesn't take a psychic to know that I'm angry!

B: Funny you should say that. I'm late because my clairvoyance class ran late.

B: I knew you were going to ask that. I'm taking a clairvoyance class to improve my sixth sense.

A: Are you joking? Sometimes I don't know when you're fooling around.

B: Naturally, you don't know. You're not clairvoyant. But I am and I knew you that would doubt my psychic ability.

A: I doubt your psychic ability because it doesn't exist. There's no such thing as second sight or psychics or clairvoyants.

B: Not everyone has the gift. So many people, like you, fear our special powers. My teacher Clair warned me about that.

A: Your clairvoyance teacher is named ... Clair?

B: Strange, isn't it. Or is it? She knew when she was a little girl that she had extrasensory perception. So she became a clairvoyant! Her business is called "Clair Voyant's School of Second Sight and Paranormal Perception.

B: Go ahead and make fun. But since taking this class, my second sight has really improved. Now, I know what's going to happen before it actually does.

B: It's true. Take today, for example. I would have been much later. But I knew traffic would be terrible. So, I took a back road to get here.

A: It's a work day at rush hour! Of course, there will be a lot of traffic!! I have to get out of here. You are driving me crazy!

B: I knew you were going to say that!

And that's all the time we have for Words and Their Stories! Until next time ... I'm Anna Matteo.

Do you believe in clairvoyance? Have you ever felt you had a sixth sense or second sight ability? Or are you a non-believer in ESP? Let us know in the Comments Section!

Anna Matteo wrote this story. Ashley Thompson and George Grow were the editors.

psychic – n. a person who has strange mental powers and abilities (such as the ability to predict the future, to know what other people are thinking, or to receive messages from dead people

insight – n. the ability to understand a person or a situation very clearly : the understanding of the truth of a situation

sixth sense – n. a special ability to know something that cannot be learned by using the five senses (such as sight or hearing)

extrasensory perception (ESP) – n. the ability to know things (such as what another person is thinking or what will happen in the future) that cannot be known by normal use of the senses

second sight – n. the capacity to see remote or future objects or events

yell – v. to say (something) very loudly especially because you are angry, surprised, or are trying to get someone's attention

abnormal – adj. differing from the normal usually in a noticeable and usually problematic way

rush hour – n. a period of the day when the demands especially of traffic or business are at a peak