Update Required To play the media you will need to either update your browser to a recent version or update your Flash plugin.
By VOA
05 March, 2018


A new study says more than 100,000 malaria cases went untreated in Liberia during the height of the Ebola crisis. The deadly virus spread in West Africa for two years beginning in 2014.

Ebola kills about half of those it infects. It causes flu-like effects first, then vomiting and diarrhea. It can lead to severe bleeding both inside and outside the body. The disease spreads through contact with an infected person's body fluids.

Three countries were mainly affected in the West African spread: Sierra Leone, Guinea and Liberia. None were well-prepared to deal with the event. Many clinics did not even have the protective tools needed to safely deal with Ebola patients, like gloves and face masks.

Bradley Wagenaar was the lead researcher of the University of Washington study.

"Rightfully so, people were afraid to go to the clinic because they might get Ebola when they're at the clinic."

The team looked at records from 379 clinics outside the Liberian capital, Monrovia. The records covered a period from 2010 through 2016.

The researchers say it took a full year and a half for health services to return to the levels they were before the Ebola outbreak.

The researcher estimate that a loss of a possible 750,000 clinic visits took place during the crisis. That includes more than 5,000 births at health care centers. Liberia already suffers one the world's highest maternal death rates. The research suggests that about 100,000 malarial treatments were lost, as well. 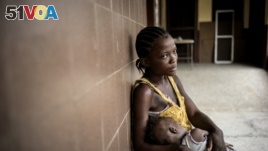 Rachel Sakie (16) and her daughter Isaatu (15 months) await for consultation at the Star of the Sun Health Center in the Monrovia township of West Point, Liberia, April 29, 2016.

Wagenaar says the number suggest the losses also of other usual services, like mosquito control and protection devices.

"Some of those other things didn't happen during the Ebola outbreak because the health system and other partners were busy with other issues. And now, the cases have been increasing."

In December 2017, malaria cases were 50 percent higher than they were before the Ebola crisis.

Wagenaar says the research shows how much more attention is needed to continue basic services during a health emergency. The research on Liberia's health care services could be used during future outbreaks. Wagenaar's team hopes it might help health care officials decide what services are most important to continue in an emergency.

vomit – v. a sickness that causes food, liquid, etc., in your stomach to come out through your mouth

diarrhea – n. a sickness that causes the body to expel waste often and in liquid rather than solid form

clinic – n. a place where people get medical help

outbreak – n. the sudden start or increase of a disease or fighting

maternal – adj. of or relating to a woman who is having a baby