Ebola: Economic Impact Could Be Devastating

Update Required To play the media you will need to either update your browser to a recent version or update your Flash plugin.
By VOA
02 October, 2014
51VOA听写整理，转载请注明出处。文本仅供参考，欢迎纠错！

The World Bank is warning that the West Africa Ebola crisis could severely harm the economies of Guinea, Liberia and Sierra Leone unless action is taken quickly. World Bank President Jim Yong Kim spoke to reporters recently to discuss the effects of the Ebola spread.

"Our findings indicate that if the virus continues to spread the economic cost to these countries could grow eight-fold by 2015. This would deal a potentially catastrophic blow to their already fragile economies," said Kim. 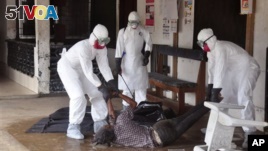 Health workers in protective gear move the body of a person that they suspect died from the Ebola virus in Monrovia, Liberia.

Mr. Kim says, "saving lives and preventing new infections" is most important. The bank has released $117-million for an "immediate humanitarian response." The World Bank President says the SARS outbreak between 2002 and 2004 showed how a disease could damage economies. 800 people died from SARS and the economic losses were estimated to be $40-billion.

Mr. Kim says SARS and the H1N1 outbreak of 2009 taught that fear and avoidance resulted in about 90-percent of the economic losses. That means the disease is causing two levels of economic damage.

The World Bank predicts the losses to the economies of Liberia, Sierra Leone and Guinea will be a combined $360-million. Mr. Kim says losses could be limited to about $97-million next year with quick action to contain the virus. However, if there is not what he calls an "immediate massive effort," losses could reach $800-million in 2015.

The World Bank's research includes only Liberia, Guinea and Sierra Leone. But early estimates show that losses could reach billions of dollars if the Ebola virus spreads widely to other African nations.

Mr. Kim says fast action is necessary. He says getting the disease under control is still far away. That is because there are not enough health care workers in the affected areas. The World Bank President says the most important issue is to act quickly in order to limit economic losses.

"However many cases there are right now, if we get an effective response on the ground in the next few months, we can really blunt the vast majority – 80 to 90-percent – of the economic impact," said Kim.

There is no cure or vaccine for Ebola. However, Mr. Kim says an effective effort could also sharply reduce the high death rate of about 53-percent for Ebola infections. He says the effort only needs more people, more money, more attention and more commitment.