Five members of Afghanistan's Taliban rejoined their families this week after 13 years in detention. The United States had been holding the five at its prison at Guantanamo Bay, Cuba. The U.S. government recently sent them to Qatar in exchange for the only American soldier held in Afghanistan.

Sergeant Bowe Bergdahl was believed to have been held prisoner for almost five years. U.S. officials believe his captors belong to the Haqqani network, a group with links to the Taliban. 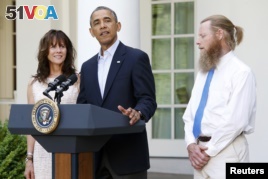 U.S. President Barack Obama stands with Jami and Bob Bergdahl (R) as he delivers a statement about the release of their son, prisoner of war U.S. Army Sergeant Bowe Bergdahl, in Washington May 31, 2014.
Defense Department officials say Sergeant Bergdahl's release followed several weeks of secret, indirect talks. The government of Qatar reportedly assisted in the negotiations. 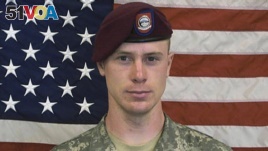 U.S. Army Sergeant Bowe Berghdal
Republican Party lawmakers welcomed Bowe Bergdahl's release, but questioned the prisoner exchange. Senator John McCain was himself a prisoner of war during the Vietnam War. He described the five Afghans as hardened terrorists and violent extremists. He and other Republicans wanted the Obama administration to explain what steps were taken to make sure the five never return to fight against the United States.

The government in Afghanistan was angered at President Obama's decision to release the detainees. The Afghan foreign ministry said the decision was a possible violation of international law.

U.S. Defense Secretary Chuck Hagel has defended the agreement to exchange the detainees for Sergeant Bergdahl. He also defended the decision not to inform Congress before the exchange took place, as required by law.

Secretary Hagel said he does not think the deal will endanger U.S. military personnel or civilians by inviting future deals with hostage-takers.

The events leading up to the capture of the American in 2009 remain unclear. A soldier who served with him said the former prisoner is no hero.

"People calling him a hero or calling him this great soldier? It's a spit in the face to all the soldiers who were there."

That was former Army Sergeant Evan Buetow. He was Bowe Bergdahl's team leader in Afghanistan. He says he is happy Sergeant Bergdahl is safe. But he says he cannot understand celebrating a soldier he says just walked away from his base.

On social media, others accused Bowe Bergdahl of walking away and of getting U.S. troops killed as a result of his actions.

Jonah Blank is with the RAND Corporation policy group. He notes the Army recognized the soldier with promotions not once, but twice during his captivity. He says this suggests his actions were nothing less than honorable.

Army Secretary John McHugh has made clear the military's first goal is to make sure Sergeant Bergdahl regains his health. He says once that happens, the Army will launch what he called a "comprehensive, coordinated" investigation of the soldier's disappearance.