Update Required To play the media you will need to either update your browser to a recent version or update your Flash plugin.
By Hai Do
11 July, 2017


Newly released emails show that a son of U.S. President Donald Trump wanted to meet with a Russian lawyer during the 2016 election campaign.

Donald Trump Junior was hoping the lawyer would provide damaging information about former Secretary of State Hillary Clinton. At the time, she and his father were the leading candidates for president.

On Tuesday, Trump Jr. released a series of emails that he said led to the meeting. The release followed a report in The New York Times newspaper. The son described his action as an effort "to be totally transparent." 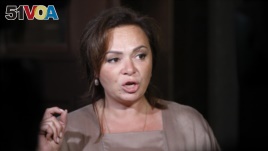 Goldstone described Veselnitskaya as a "Russian government attorney." He said she has "information that would incriminate Hillary" and that the information "is part of Russia and its government's support for Mr. Trump."

Reacting to the email, Trump Jr. wrote back "If it's what you say, I love it."

He also wrote that people attending the meeting "will likely be Paul Manafort (campaign boss) my brother in law and me."

In one of the emails, Goldstone wrote "I can also send this info to your father via Rhona." Rhona Graff is said to be a long-time personal assistant to the current president.

Trump Jr. has said different things about the talks with Veselnitskaya and its purpose.

On Saturday, he said it was a "short introductory meeting" about adoptions of Russian children by American families.

A day later, Trump Jr. changed his story, saying that he was told before the meeting that Veselnitskaya might have information "helpful" to the Trump campaign.

On Tuesday, Trump Jr. said on Twitter he believes the information about Clinton was "Political Opposition Research." He added, the attorney, "as she has said publicly, was not a government official. And, as we have said, she had no information to provide and wanted to talk about adoption policy and the Magnitsky Act."

Reactions to the emails

Ron Wyden, a senator from Oregon, is a member of the Democratic Party. He said the newly released emails "show there is no longer a question of whether this campaign sought to collude with a hostile foreign power to subvert America's democracy."

Republican Senator Lindsey Graham says that the younger Trump "definitely has to testify" before a Senate committee exploring Russian interference.

Sara Huckabee Sanders is deputy press secretary in the Trump White House. She read a short statement from the president to reporters. In the statement, Trump said his son is "a high-quality person," and he praises "his transparency."

Hai Do adpated this story for Learning English based on VOA News, the Associated Press and Reuters news reports. George Grow was the editor.

attorney - n. a person whose job is to guide and assist people on the law; lawyer

incriminate - v. to cause (someone) to appear guilty

boss - n. a person whose job is to tell other workers what to do

adoption - n. the act or process of adopting a child

collude - v. to work with others secretly in order to do something illegal or dishonest

testify - v. to talk or answer questions while formally promising that what you say is true