The Mystery of the Disappearing "That"

Update Required To play the media you will need to either update your browser to a recent version or update your Flash plugin.
By John Russell
15 December, 2016

Today, we are going to explore a mysterious word in English that seems to appear and disappear at will!

If you are wondering what we mean, consider these examples. One is from a classic American film Casablanca. The second is from the popular music group Plan B.

"I think this is the beginning of a beautiful friendship" -- Casablanca

"Now we don't talk and it's a shame,
I guess I only have myself to blame,
Cos girl you meant so much to me"

Both of these clips have something in common: they leave out the word "that."

Why did Humphrey Bogart, the main actor in Casablanca, not say, "I think that this is the beginning of a beautiful friendship"?

Why did Plan B not sing, "I guess that I only have myself to blame"?

In today's Everyday Grammar, we will explore why and when English speakers leave out the word that from a sentence.

That in a noun clause

The word that can have several meanings in the English language. 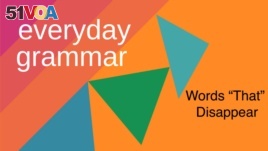 Sometimes, it can be used to indicate an object or a person, as in the sentence "That man is very nice!"

Other times, the word that is used to introduce a second clause to a sentence. You might hear someone say, "I think that English grammar is difficult!"*

It is this use of that that often confuses English language learners.

Today, we are studying the word that in a noun clause. A clause is a group of words that has a subject and a predicate. In other words, it could stand on its own as a sentence. When a group of words could be a complete sentence, we call it an independent clause.

However, sometimes a clause depends on other clauses in a sentence. It cannot stand on its own as a sentence. When this is the case, we say that the clause is dependent.

One type of dependent clause is the that-clause. It acts as a noun in the sentence. It often follows common verbs like think, say, or guess, and all of the verbs that are synonyms of these verbs, like believe, admit, remind, and so on.

I think that learning English is fun.

It is in these types of clauses – clauses that give more information about the main clause - that English speakers often leave out the word that.

There is not really a rule about when to leave out the word that from a that-clause. It is a stylistic choice.

Conrad and Biber are two English grammar experts. They say there are three general characteristics that usually go along with leaving out the word that from a sentence.

The first characteristic is that the main clause has the verb say or think. So, when a speaker begins a sentence with ‘I think' or ‘he thought' or some other use of 'say,' you are less likely to hear the word that.

The second characteristic of sentences that leave out that is: the subject of the that-clause is the same as the main clause.

Characteristic #3 Subject of that-clause is a personal pronoun

The third characteristic of sentences that leave out that is as follows: the subject of the that-clause is a personal pronoun.

You might hear a teacher say, "I knew he didn't do his homework,"

You Are More Likely to See "That" in Writing

All of these characteristics are less common in writing.

These characteristics of language can be difficult to learn. However, with time and practice, you will begin to recognize how native speakers leave out parts of the language.

Understanding that words – such as that – are sometimes left out of a sentence will also help you read and understand English better.

*We are not discussing relative clauses with "that" in this story.

predicate – n. grammar the part of a sentence that expresses what is said about the subject

function – v. to have a specified function, role, or purpose

dependent clause – n. grammar a clause that does not form a simple sentence by itself and that is connected to the main clause of a sentence

drop – v. to not include (someone or something)

characteristic – n. a special quality or trait that makes a person, thing, or group different from others