Update Required To play the media you will need to either update your browser to a recent version or update your Flash plugin.
By Bryan Lynn
02 May 2022


A group of civilians has safely left the grounds of a steel factory in the eastern Ukrainian city of Mariupol. Hundreds had sought refuge there since Russian troops took control of the rest of the city.

More than 100 mostly women and children travelled on buses, ambulances and other vehicles toward for the Ukrainian-controlled city of Zaporizhzhia, about 230 kilometers to the northwest, Russian and Ukrainian officials reported. Each side shared videos of the operation.

Mariupol Deputy Mayor Sergei Orlov told the BBC that the evacuees would probably not arrive on Monday as planned. He said they were making slow progress but gave no explanation for such a delay. 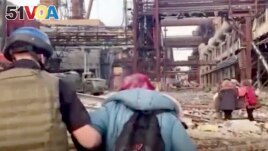 At least some of the civilians were apparently taken to a village controlled by separatists loyal to Russia. The Russian military said some of the evacuees chose to stay in territory under separatist control. It said others left for Ukrainian-held territory.

The United Nations and the International Committee of the Red Cross carried out Sunday's evacuation during a brief ceasefire at the factory. Officials from the groups described the effort as a "safe passage operation."

Before the weekend, about 1,000 civilians were believed to be camped at the steel factory, along with an estimated 2,000 Ukrainian fighters, The Associated Press reported. Ukrainian Deputy Prime Minister Iryna Vereshchuk called the situation at the city's steel factory "a real humanitarian catastrophe."

Overall, as many as 100,000 Ukrainian civilians may still be in Mariupol. The city has experienced a two-month bombing campaign. Russian troops now control all other parts of Mariupol, which had a pre-war population of more than 400,000.

Russian attacks on the city have trapped civilians with limited supplies of food, water, medicine and electricity.

Some Mariupol residents got out of the city on their own, in private, often damaged, cars.

Yaroslav Dmytryshyn arrived at a welcome center in Zaporizhzhia in a car full of children. Signs on the car were marked with the words, "Children" and "Little ones."

"I can't believe we survived," he said, looking tired but in good spirits about their safe arrival after two days on the road.

"There is no Mariupol whatsoever,'' he said. "Someone needs to rebuild it, and it will take millions of tons of gold." He said his family lived just across the railroad tracks from the steel plant. "Ruined," he said. "The factory is gone completely."

Anastasiia Dembytska, also fled her Mariupol home from which she could see the factory. "We could see the rockets flying" and clouds of smoke over the plant, she said.

She escaped with her daughter, nephew and dog during the brief break in attacks.

evacuation – n. the removal of someone or something from a dangerous place

catastrophe – n. an extremely bad event that causes a lot of suffering or destruction

resident – n. someone who lives at a particular place