The Struggle to Save Iraq's Last Persian Leopards

Update Required To play the media you will need to either update your browser to a recent version or update your Flash plugin.
By Jonathan Evans
29 April 2022


On a recent day, Bahez and Nabaz Farooq Ali were on Bamo Mountain in Iraq's Kurdistan area. The brothers hoped to make video recordings of a Persian leopard. It is believed there are only about 1,000 of the animals left in the wild.

"Our grandparents saw some even during the day," Nabaz said. Since then, the animals have almost all disappeared.

Most Persian leopards are in Iran and Afghanistan. Iraqi Kurdish conservationist Hana Raza estimates there may be 25 left in Iraq. The International Union for Conservation of Nature lists the animal as endangered. 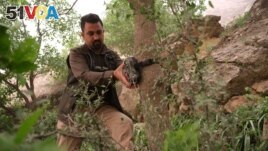 Kurdish environmentalist Nabaz Faruq puts a camera trap on a tree to collect footage of the leopards and wild animals in Bamo mountain, near Darbandikhan, Iraq, April 9, 2022. (REUTERS/Mohammed Jalal)

Conservationists in Iraqi Kurdistan support increased efforts to protect the leopard. The animals are threatened by a severe loss of habitat, human interference, hunting and the effects of war.

Soran Ahmed is a biologist at the University of Sulaimaniya. He said about 10 different Persian leopards had been recorded. But he added that 10 others have been found dead in the last 10 years, two of them shot by bullets.

The Ali brothers had left their village of Horen to escape former president Saddam Hussein's violent campaign against the Kurds. When they returned in 1991, they found the village empty and partly destroyed.

"When people returned to...their villages, they also started to hunt randomly," Nabaz said. Hunting of the leopards' prey, such as wild goats, helped lead to a decrease in their numbers.

Hunting of endangered animals is not permitted in Iraq's Kurdish area. Anyone caught illegally hunting can be fined. But forest police official Akram Saleh said the laws can be difficult to enforce.

"The area is very large and we don't have the necessary resources to cover it," he said. "Hunters have better weapons, better cars than us."

In parts of Bamo Mountain, land mines have kept humans and cows away from some areas where leopards live, Nabaz said. The mines make researchers' work more dangerous. Animals in the area are also affected.

Data from the Kurdistan Regional Government (KRG) show that the Kurdish area lost almost half of its forest between 1999 and 2018. That caused a severe loss in the leopard's habitat.

Razzaq al-Khaylani is a spokesperson for the KRG board of environment. He said a lack of public money for conservation and conflicts in the area have stopped some efforts.

Soran Ahmed said, "Places like Bamo mountain, if effectively protected, could become a breeding site [for the leopards]."

He added, "We have to save them, they are part of our culture and identity."

randomly –adv. in a way that is not regular or that does not follow a plan

prey –n. an animal that is hunted or killed by another animal for food

breeding –adj. the process by which young animals are produced by their parents