Update Required To play the media you will need to either update your browser to a recent version or update your Flash plugin.
By Faith Pirlo
23 April 2022


The messages, reports from across Ukraine, read: 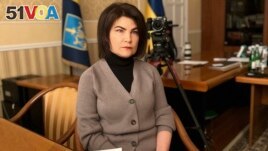 Ukrainian Prosecutor General Iryna Venediktova is looking at her cell phone as the messages come in. Her staff will collect the messages, register the reports, and investigate them for evidence of possible war crimes.

Venediktova declared last week that Ukraine would seek official international justice against Russia for its war. She noted at the time that the process would not be a quick one, especially as the warring continues.

And, so it is. The office is slowly and carefully gathering the information with one goal in mind: to hold Russia's military and its president, Vladimir Putin, accountable for the death and destruction in Ukraine.

Venediktova's office has opened more than 8,000 criminal cases linked to the war already. Investigators have identified 500 suspects so far, including Russian government ministers and military commanders.

Venediktova has deployed prosecutors to refugee centers across Ukraine and at border crossings. They talk with the displaced, seeking the refugees' stories of the war to document as evidence.

Even little details reported by a witness can be important. A description of an attacker's clothing, or the sound of shelling, might lead to a major finding.

The interviews are slow and careful but worthy of the time. Venediktova and her office say they have documented evidence of mass burial sites, execution of civilians, shelling of civilian areas, repeated attacks on hospitals, forced disappearances, torture, sexual violence and cities under siege, denied food, water and humanitarian aid.

For Venediktova, the goal is personal. "I protect the public interest of Ukrainian citizens," she told The Associated Press. "And now I see that I can't protect these dead kids. And for me it's pain," she said.

The 43-year-old former law professor became Ukraine's prosecutor general in 2020, the first woman to serve in the position. Since the war, she is on the move continuously with special safety measures in place, including bullet-proof military clothing. There is little time to eat or rest.

"The main functions of the law are to protect and to compensate. I hope that we can do it, because now it's just beautiful words, no more rule of law," Venediktova says. "It's very beautiful words. I want them to work."

Recently Venediktova visited the Lviv office. She and prosecutors spoke with Ala. Ala is 34 years old, and she has an 8-year-old daughter. Ala did not give her last name because her daughter is still in the Russian-controlled area.

Ala explains to them that shelling destroyed her home. She collected a piece of metal for evidence.

"We need proof for them to be punished. I am lucky. I am still here to talk about what happened to me," Ala said.

Venediktova has been creating partnerships and relations with human rights group. Some of these groups and the public have been concerned about the Ukrainian authorities in the past.

Venediktova also wants average citizens to help collect evidence by using their phones to send the information to a government website. In the past five weeks there have been over 6,000 claims on the site.

Most nights, Venediktova appears on Ukrainian TV to speak to the people of her country. She tells them that Ukraine will punish Russia for its actions.

"My first joy will be victory when we sell someone's villa, yacht, and our ordinary Ukrainians, who were forced to flee their homes, will physically receive this compensation," she says. "Thank you, good evening, see you soon."

staff – n. people who work and are employed by a company or organization

prosecutor – n. one who is in charge of the process of pursuing formal charges against an offender to final judgment

bullet-proof – adj. not able to be penetrated by bullets

compensate – v. to give money to make up for something

villa – n. a large house, usually in the countryside or near the sea, especially in southern Europe, and often one that people can rent for a vacation

yacht – n. a large boat that is used for racing or pleasure