Update Required To play the media you will need to either update your browser to a recent version or update your Flash plugin.
By Bryan Lynn
21 May 2021

The company showed off its new model, the F-150 Lightning, during an event this week. In announcing the vehicle, Ford chief Jim Farley said it represented "a watershed moment" for the company. He added, it also marked "a very important transition" for the automobile industry.

Experts say that with its new vehicle, Ford is aiming to be highly competitive with other companies in the electric truck market, notably Tesla and General Motors (GM). The Lightning seems to offer buyers new technology in a popular, proven vehicle that is also good for the environment and saves on fuel costs. 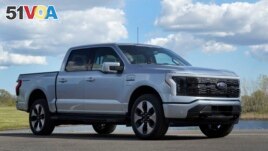 The trucks are to be manufactured at a production center in Dearborn, Michigan beginning next year. Ford said it was investing $700 million into the production complex and was adding 500 new jobs. It plans to start selling the vehicles in the spring of 2022.

With a starting price near $40,000, the F-150 Lightning will be available in four different versions. The base model will have a traveling range of 370 kilometers on one battery charge.

Ford says the size of the cab and bed of the electric vehicle will be the same as its gas-powered F-150. And with a federal tax credit of up to $7,500 available for Ford electric vehicles, the price of the base model falls to around $32,500. That is below the lowest-priced gas model of the F-150, which starts at $37,000.

The company says the high-end Lightning – which is equipped with a longer-range battery – can pull an estimated 4,500 kilograms. This is comparable to many gas-powered trucks, but it falls about 1,350 kilograms short of Ford's powerful V-8 engines.

The F-150 Lightning comes with a 39 centimeter, electronic control screen and extra storage space where the gas engine would be. Ford says the Lightning with the extended-range battery can fully power a home for up to three days. The high-end truck will likely cost between $60,000 to $90,000.

In a usual year, Ford sells about 900,000 F-series trucks in the U.S. The model has been America's top-selling vehicle for nearly 40 years. F-150 trucks are commonly used at building sites across the U.S.

Ford expects to increase yearly production of the electric F-150 to 40,000 vehicles or more, beginning in 2023. That information comes from Sam Fiorani, an expert at industry research company AutoForecast Solutions, who spoke to Reuters.

By comparison, Tesla's electric Cybertruck is set to begin high-level production in 2022, with a starting price of $39,900. GM describes its first electric pickup as an "electric supertruck," the GMC Hummer EV. It will go into production in autumn of 2022, and will be priced from nearly $80,000 to nearly $100,000.

While electric vehicle sales in the U.S. are rising, the overall share of the market is still very low. This year, through April, automakers sold about 108,000 fully electric vehicles (EV) in the U.S. That is nearly twice the number from the same period last year. However, auto industry researcher Edmunds reports that EVs still account for only 2 percent of U.S. vehicle sales.

watershed – n. a moment in time when important change happens

transition – n. a change from one system or method to another

battery – n. a device that is placed inside something to supply it with electricity

cab – n. the front part of a truck where the driver sits

screen – n. the part of a computer or device that shows images or writing