Update Required To play the media you will need to either update your browser to a recent version or update your Flash plugin.
By Susan Shand
21 May 2021


The 500th anniversary of the Spanish battle to conquer Mexico arrives on May 22.

Some believe the battle for Tenochtitlan, the Aztec capital now called Mexico City, was the birth of modern Mexico. Others believe it was the start of a tragedy that has lasted for centuries.

The battle lasted for months before the city fell to Hernan Cortes and the Spanish conquistadores, or conquerors. The battle was one of the few times an Indigenous army fought European colonial powers.

"The fall of Tenochtitlan opened the modern history of the West," said historian Salvador Rueda. He is director of the city's Chapultepec Museum.

The event is memorialized by a plaque in the city's Plaza of Three Cultures. It honors Indigenous Mexico, Spanish colonialism and the mixed-race Mexico, also called Mestizo, that came from the conquest.

"It was neither a triumph nor a defeat. It was the painful birth of the Mestizo (mixed-race) Mexico today," the plaque reads. 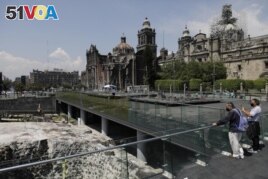 People observe the archaeological site of Templo Mayor in the historic center of Mexico City, Tuesday, May 18, 2021.(AP Photo/Eduardo Verdugo)

The Mexican government has backed that idea ever since: Mexico is a non-racial, non-racist, unified nation where everyone is mixed-race, bearing the blood of both conquerors and conquered.

A few streets away is a different message. On the wall of the small church of Tequipeuhcan, another plaque reads: "Tequipeuhcan: The place where slavery began." It says this is the place where the Aztec Emperor was taken prisoner after his defeat.

"The fall of México-Tenochtitlán started a tale of epidemics, abuses and 300 years of colonial rule in Mexico," said the city's mayor Claudia Sheinbaum.

Over the next three centuries, colonizers stole the land from Indigenous peoples and made them work it, taking the wealth for themselves.

David M. Carballo is a professor of Latin American studies at Boston University. He said the conquest of Mexico "connected the transatlantic to transpacific world and all the habited continents. That kicked off what we now call globalization."

Cortés and his 900 Spanish soldiers started the battle on May 22, 1521. The Spanish army was strong and experienced. It had spent hundreds of years fighting to take back Spain from the Moors. They also brought in other Indigenous peoples who were oppressed by the Aztecs to join the fight.

They stopped water and food from entering the city. Their most powerful weapon, however, was the disease smallpox, which they brought with them from Spain. Against this disease, the Aztecs were defenseless.

Carlo Viesca is a medical historian at Mexico's National Autonomous University. He said about 150,000 of the city's 300,000 citizens died of smallpox before the Spaniards took control. One Spaniard described it as "walking on corpses," said Viesca.

Because of the number of bodies and the smell of death, the Spanish cold not live in the city for months. Eventually, they destroyed all the buildings to bury the dead in the wreckage.

The history of Mexico might have been very different if the former leader, Emporer Cuauhtemoc, had not died of smallpox in 1520.

He had successfully led the Aztec resistance, but was captured and tortured by the Spanish before dying of smallpox. He is still a beloved figure in Mexican history.

The defeat of the Aztecs showed the hopelessness of any attempt by Indigenous peoples in South America to fight the Europeans and their huge armies. There were some battles, mostly between the Spanish and Inca armies during the conquest of Peru. But eventually, the Indigenous peoples fell back on guerrilla actions, such as raids followed by retreats into the remote countryside.

plaque – n. a flat, thin piece of metal or wood with writing on it that is used especially as a reminder of something (such as a historic event or an achievement)

habited - adj. referring to a place where human beings live

globalizeation– v. to make (something) cover, involve, or affect the entire world