Update Required To play the media you will need to either update your browser to a recent version or update your Flash plugin.
By Christopher Cruise
31 January, 2015


Three former secretaries of state spoke to members of the Senate Thursday. They discussed how the U.S. should deal with illegal immigration, and what its part should be in conflicts around the world.

Henry Kissinger was secretary of state for President Richard Nixon in the 1970s. George Schultz served in the position for President Ronald Reagan in the 1980s. And, President Bill Clinton appointed Madeleine Albright in the 1990s. 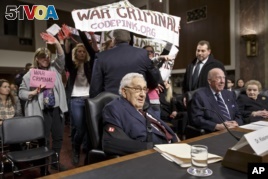 Ms. Albright told the senators that the conflict between Russia and Ukraine had caused more worries in Europe than at any time since World War II.

"Russia's ongoing aggression against Ukraine has fundamentally changed security calculations on the continent and marked the first time since World War II that European borders have been altered by force. Events of recent days have shown that what many had assumed would become a frozen conflict is still, in fact, red hot."

Mr. Kissinger said the Islamic State, or ISIS, grew from struggles for power in the Middle East between states and ethnic and religious groups. He says the group threatens the existence of countries in the area.

"The continuation of a territory under terrorist control that avows its aim the overthrow of all existing institutions is a threat to security, and the conflict with ISIS must be viewed within that context."

Mr. Schultz also discussed issues affecting the U.S. in Europe and the Middle East. But he also talked about North American issues. He said the U.S. should try to help its southern neighbors.

"We had that crisis not long ago with all these kids showing up on our border, none of them were Mexicans. It only underlines the point that the border that we need to be worrying about is Mexico's southern border...and we need to be worrying about and how can we help them. And why is it that conditions are so bad in El Salvador, Honduras and Guatemala that parents send their children north to see if they can't get something better. We got to pay attention down there. That's all part of this problem of illegal immigration."

Activists from the anti-war group Codepink interrupted the hearing. They tried to make a citizens' arrest of Mr. Kissinger. They accused him of wrongdoing in connection with past conflicts in South America and Vietnam. Police removed the protesters from the room.

calculation – n. careful thought and planning that is done usually for selfish reasons

alter – v. to change (something)

avow – v. to declare or state (something) in an open and public way

context – n. the words that are used with a certain word or phrase and that help to explain its meaning

Has the Ukrainian conflict caused great concern among your country's leaders? What do you believe caused ISIS to be formed and grow? We want to hear from you. Write your thoughts in the comments section.