Update Required To play the media you will need to either update your browser to a recent version or update your Flash plugin.
By Christopher Cruise
28 January, 2015


An international rights group is accusing the government in Ethiopia of systematically suppressing media before the country's elections in May. Human Rights Watch released a report on the subject last week. The report shows how the Ethiopian government has restricted independent reporting since 2010.

"The next level is, is threats and harassments against family members -- quite often arbitrary detention to intimidate and to pressure the journalist into censoring their writing(s). If that doesn't work, the next step seems to involve criminal charges."

The new Human Rights Watch report is called "Journalism Is Not a Crime." It says 22 journalists, bloggers and publishers faced criminal charges, and more than 30 journalists fled Ethiopia. Most of those charged were accused of violating a widely criticized anti-terrorism declaration.

Human Rights Watch says the repression described in the report is leading to self-censorship. Some Ethiopian journalists are now refusing to report on some issues. The rights group adds that citizens and lower-level government officials are afraid to talk to reporters because they believe the government will punish them. 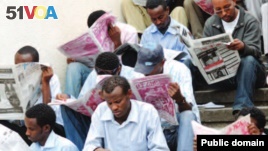 Felix Horne says the repression has led to a reality where only positions of Ethiopian officials or the government are discussed in the media.

Ethiopia's ruling party has governed the country since 1991. It won more than 99 percent of the votes in the 2010 elections. The opposition won just one seat in parliament.

Getachew Redda is a special advisor to Ethiopia's prime minister. In his words, "HRW lost their credibility a long time ago, even by their own supporters, so there is no point for us to respond to their remarks."

He said journalists who have been detained are jailed because they are guilty of a crime. In his words, "you can be anything -- a journalist or pretending to be a journalist -- but being involved in criminal activity is still a crime and they will be held responsible."

Human Rights Watch is calling on the Ethiopian government to release imprisoned journalists and bloggers and to amend the anti-terrorism measure.

This report is based on a story by Correspondent Marthe Van der Wolf from Addis Ababa. Christopher Cruise wrote it for VOA Learning English. George Grow edited the story.

arbitrary – adj. not planned or chosen for a particular reason

censor(ing) – v. to examine books, movies, letters and news reports in order to block or remove things that are considered to be offensive, immoral, harmful to society or in disagreement with, or not supportive of, a government's policies

discourse – n. the use of words to exchange thoughts and ideas

dialogue – n. a discussion or series of discussions that groups or countries have in order to end a disagreement

decimate – v. to severely damage or destroy a large part of (something)

Does your government restrict or attempt to restrict the activities of journalists? Have any publications in your country closed because of government pressure? We want to hear from you. Write your thoughts in the comments section.