From Shining Shoes in Africa to a Seat in Italy's Parliament

Update Required To play the media you will need to either update your browser to a recent version or update your Flash plugin.
By Gregory Stachel
14 October 2022


When Aboubakar Soumahoro was a child in his West African home country of Ivory Coast, he cleaned people's shoes to make money. He also had a dream to go to Italy. He would cut out magazine pictures related to the country and save them in a record book.

His dream came true in 1999 when he arrived in Rome, Italy's capital. He was 19 years old and shocked by the difficulties he faced in a country he had prized for so long.

"Sleeping rough in the streets was traumatic, especially when I realized that this was the result of a political decision that targeted the migrants," Soumahoro told Reuters. 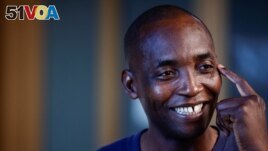 Italian-Ivorian activist, trade unionist and newly elected member of Parliament Aboubakar Soumahoro points to his head during an interview with Reuters in Rome, Italy on October 5, 2022. (REUTERS/Yara Nardi)

Now an Italian citizen, the 42-year-old has the chance to re-shape migrant life in the country – from within parliament.

Last month, Soumahoro won a seat in Italy's lower house of Parliament, representing the Green and Left Party. He faces a conservative government that is seeking to increase restrictions on asylum seekers.

"One thing I will try to do is make sure that no one ends up living in the streets like me," Soumahoro said before the opening of parliament on October 13.

"People need to be treated as human beings regardless of what passport they have," he added.

The new lawmaker is the only Black member of Parliament's Lower House, a group of 400 representatives.

"I do not want to represent just one part of society. I want to make sure that everyone, both the dispossessed and those who struggle to make ends meet, can recognize themselves in what we do," he said.

Soumahoro's election comes from a great many steps he took before arriving in office. They include field work harvesting crops, employment at a gasoline station, sociology studies at Naples University, and writing a book.

Soumahoro is restrained in discussion of his personal life. He says he has a young child and stays in touch with his family in Africa. He told Reuters that Italian politics was too personal already, and said, "It is more important to talk about 'us' and not 'I'."

Within a few years of his arrival in Italy, he became an activist helping migrants who were without official documents. He worked to improve working conditions for temporary farm laborers. Later, he established an agricultural workers union.

Brothers of Italy won the most votes in the elections last month. It and the League party have promised to block migrants coming by sea from North Africa. The alliance calls their stated policy "Italians First."

"Putting Italians first is not going to pull 5.6 million Italians out of poverty." He said the lawmakers fail to understand the severity of problems faced by average families.

The election winners have said they will reduce access to government assistance known as "citizen's income." The monthly payment goes to poor and unemployed people.

Soumahoro argues that the program needs to be expanded, not reduced.

"Politicians haven't seen the coming hurricane of poverty," he said. He warned that rising energy and food prices would create growing difficulties. And he argued that a better spread of wealth would help decrease rising social tensions.

He said, "The politics of happiness is real. It can be done."

rough – adj. difficult or unpleasant to deal with

traumatic – adj. causing someone to become very upset in a way that can lead to serious mental and emotional problems

regardless – adj. without consideration