Update Required To play the media you will need to either update your browser to a recent version or update your Flash plugin.
By John Russell
13 October 2022


European leaders have been paying a lot of attention to natural gas projects in Africa. The interest comes at a time when European officials are trying to find new energy resources because of reduced natural gas flows from Russia.

A new liquefied natural gas (LNG) project off Africa's western coast has received visits from the leaders of Poland and Germany. 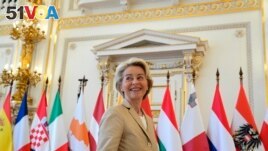 The field is about 80 percent complete. It is near Senegal and Mauritania's coasts. It is expected to hold about 425 billion cubic meters of gas, five times more than what Germany used in all of 2019. But production is not expected to start until the end of next year.

The new field will not help solve Europe's energy crisis caused by Russia's war in Ukraine. But, Gordon Birrell, an executive for project co-developer BP, said the development "could not be more timely." That is because Europe is seeking to reduce its use of Russian natural gas to power factories, generate electricity and heat homes.

"Current world events are demonstrating the vital role that (liquid gas) can play in underpinning the energy security of nations and regions," he told an energy industry meeting in West Africa last month.

The 27-nation European Union is getting ready for the possibility of a complete Russian gas cutoff. EU energy ministers have been debating price limits on energy prices in recent weeks. European leaders have visited Norway, Qatar, Azerbaijan and especially countries in North Africa, where Algeria has a pipeline running to Italy and another to Spain.

In July, Italy signed a $4 billion gas deal with Algeria. The deal came one month after Egypt reached an agreement with the EU and Israel to increase sales of LNG. Angola also has signed a gas deal with Italy.

An earlier agreement will let Italy's biggest energy company start production at two Algerian gas fields this week. But, experts said it is not clear when production will start from the July deal.

Senegalese President Macky Sall wants African countries to benefit from these projects. But African leaders do not want to export all their gas — an estimated 600 million Africans lack electricity.

"It is legitimate, fair and equitable that Africa, the continent that pollutes the least and lags furthest behind in the industrialization process should exploit its available resources to provide basic energy," Sall told the U.N. General Assembly last month.

Algeria is a major gas supplier. In 2020, Algeria and Egypt made up 60 percent of the natural gas production in Africa. But Algeria cannot make up for Russian gas cuts to Europe, said Mahfoud Kaoubi. He is a professor of economics at the University of Algiers.

Egypt also is looking to export more natural gas to Europe. The country is even limiting energy for shopping center air conditioners and streetlights so it can export gas.

Prime Minister Mostafa Madbouly said Egypt hopes to bring in an additional $450 million a month in foreign currency. State media reported that he wants Egypt to use 15 percent less energy at home so it can be exported.

And a new, three-party deal calls for Israel to send more gas to Europe through Egypt, which can liquefy it for export by sea. The EU says it will help the two countries increase gas production and exploration.

Krista Larson reported on this story for the Associated Press. John Russell adapted it for VOA Learning English.

underpin – v. to strengthen or support (something) from below

legitimate—adj. fair or reasonable; allowed according to rules or laws

lag – v. to move more slowly than others

exploit -- v. to use (someone or something) in a way that helps you