Update Required To play the media you will need to either update your browser to a recent version or update your Flash plugin.
By Christopher Cruise
17 November, 2014


The U.S. State Department has closed its public email system and websites after a suspected attack by computer criminals called "hackers." It had never been shut down before.

A senior official told the Associated Press on Sunday that only the unclassified email system and websites were affected. The affected email system was not used to send secret communications.

Workers are now repairing the damage caused by the hackers and are improving the security of the system. The repairs should be finished Monday or Tuesday. The State Department plans to talk about the attack when the repairs are completed. 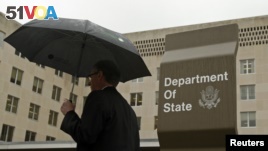 According to the official, the State Department detected "activity of concern" last October. It was around the same time hackers tried to gain access to the White House computer network. At that time, it appeared that the State Department computers were not affected. And there was no indication that the two hacking attempts were related.

Last month, hackers gained access to an unclassified computer system at the White House and did not get through the part that holds secret information. Two other U.S. government agencies, the U.S. Postal Service and the National Weather Service, also reported attacks on their computer systems.

There have been reports that Russian cyber-attackers have targeted the governments of Germany and Ukraine among others, as well as NATO headquarters.

Obama administration officials have blamed hackers with links to the Russian government for the attack on White House computers. And The New York Times have reported that the attacks on the Postal Service and the National Weather Service likely came from China.

Identifying the hackers is difficult. Hackers often take control of computer networks around the world and then launch their attacks through those systems.

This report was based on stories from VOA News and the Associated Press. Christopher Cruise wrote this story for Learning English. Hai Do was the editor.

hacker – n. a person who secretly gets access to a computer system in order to get information or cause damage

network – n. a system of computers that are connected to each other

cyber – adj. related to computers and the Internet