Harriet Tubman to Appear on $20 Bill

Update Required To play the media you will need to either update your browser to a recent version or update your Flash plugin.
By VOA
21 April, 2016

The last time a woman appeared on U.S. paper money was during the 1890s. That woman was Martha Washington, the wife of America's first president George Washington.

But this week, the U.S. Treasury announced that a woman will soon appear on the $20 bill. African-American abolitionist Harriet Tubman will replace Andrew Jackson, America's seventh president. Tubman led hundreds of slaves to freedom through what is called the "underground railroad."

U.S. Treasury Secretary Jack Lew confirmed Wednesday that Tubman will be the first African-American featured on U.S. money. Lew did not say when the new bill would be printed and used.

Lew originally announced his plan to put a woman on the $10 bill last June. But, many groups and people urged him to consider putting a woman on the $20, too. That led to the #womenon20s movement on social media.

Andrew Jackson was responsible for the Indian Removal Act of 1830. That started what was known as the Trail of Tears -- a forced migration during which thousands of Native Americans died. 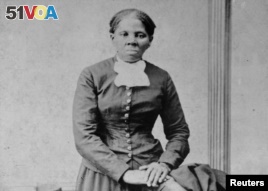 Tubman grew up a slave in Maryland. She was born in 1822. Most historians believe she was taken from her parents and put to work when she was barely 6 years old.

As a young woman, she married John Tubman. She escaped to the north with the help of a white neighbor. Harriet Tubman returned to Maryland to free members of her family and other slaves. She made that trip about 20 times to lead more people to freedom.

But, Republican presidential candidate Donald Trump did not like the removal of Andrew Jackson from the $20 bill. He suggested creating a new bill for Tubman to appear on. On Thursday, he told the Today Show. "Maybe we do the $2 bill or we do another bill...Yes, I think it's pure political correctness."

Tubman will not be the only woman pictured on U.S. paper money. The $10 bill will also be redesigned. The new design will be released in 2020. The first U.S. treasury secretary, Alexander Hamilton, will remain on the front. But the back of the bill will include members of the women's suffrage movement.

The back of the $5 bill will have an image of singer Marian Anderson and former first lady Eleanor Roosevelt.

abolitionist - n. a person who wants to stop or end slavery

barely - adj. used to say that someone or something only has a specified small size, age, length, etc.

currency - n. the money that a country uses

suffrage - n. the right to vote in an election