Update Required To play the media you will need to either update your browser to a recent version or update your Flash plugin.
By Anna Matteo
26 September, 2016

For today's report, we talk about the dangers, not of an illness, but of medicines -- antimicrobial medicines. Health experts are more and more concerned about the overuse of antimicrobials. A growing number of bacteria and other disease-causing organisms are developing resistance to these drugs.

The United Nations Food and Agriculture Organization (FAO) says the growing resistance is a threat to people and animals alike. 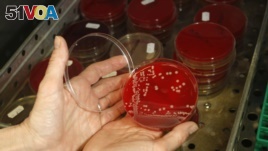 An employee displays MRSA bacteria strain - a drug-resistant 'superbug' - inside a petri dish in a microbiological laboratory in Berlin, March 1, 2008. (Reuters)

The FAO recently noted an "increased use and abuse of antimicrobial medicines in both human and animal healthcare." It said their use and abuse has led to a growing number of disease-causing microbes that are resistant to traditional medicines.

But just how widespread is antimicrobial use?

"We don't really know how much of the antimicrobials, including antibiotics, are being used in food and agriculture."

Juan Lubroth is an expert on animal health. He serves as the Chief Veterinary Officer for the FAO. He says there are many unanswered questions about the manufacturing and marketing of antimicrobial drugs.

"In fact, we don't really know how much is being made. Who is buying? Who is selling? How much is the international traffic, either as drugs ready to be used or the active ingredient inside a drug that is then formulated someplace else?"

Doctor Lubroth says the overuse of antibiotics involves everything: humans, animals and agriculture get caught in what he calls a cycle of disease transmission.

Misuse of antimicrobials includes failing to follow directions and possibly taking someone else's medicine. Lubroth admits that even he has misused antibiotics.

"Even I'm guilty. My physician may have given me antibiotics to take for the course of a week, seven days, and I stopped at day six. Well, that's bad. That's not good. That's a misuse of the antibiotics."

Failure to follow directions when taking medicine is one way germs can develop a resistance to a drug.

The FAO says that antimicrobial medicines are critical in the treatment of farm animals and plants. "Their use," it says, "is essential to food security, human well-being and animal welfare."

Lubroth says the Food and Agriculture Organization has developed a four-part action plan for antimicrobial resistance.

"One is to create the awareness among the general public of the issue. Two would be to have the evidence. Have the surveillance in place that I can monitor when the antimicrobial resistance appears, and I report it in a timely fashion..."

The action plan calls for strengthening governmental agencies that deal with public health, food and agriculture. It also calls for sharing of information with each other and with medical experts.

Another part of the plan is to provide support for good practices in food and agricultural systems and the effective use of antimicrobials. Such drugs are often used in small amounts in animal feed to support growth. Once in farm animals, they become part of the food chain.

Lubroth says "the long-term consequences of not being able to use an antimicrobials because of resistance" would be terrible. He adds that the medicines bring a "global public good to the planet."

Joe DeCapua wrote this report for VOANews. Anna Matteo adapted it for Learning English. George Grow was the editor.

food chain – n. a series of types of living things in which each one uses the next lower member of the series as a source of food

empowered – v. to give power to (someone)

veterinary – adj. relating to the medical care and treatment of animals

formulate to create, invent, or produce (something) by careful thought and effort

cycle – n. a recurring series of events: as

awareness – n. the state of knowing that something (such as a situation, condition, or problem) exists

fashion – n. manner or way of doing something