How Well is English Spoken Worldwide?

Update Required To play the media you will need to either update your browser to a recent version or update your Flash plugin.
By Phil Dierking
15 November, 2016


Adults in the Netherlands are the best non-native English speakers, a new report released Tuesday says.

The report also says that Iraq has fallen to last place.

The English Proficiency Index is based on the online test scores of 950,000 adults from 72 countries.

The results do not show the English ability of a country's entire population. They are based on people who took an online test, the EF Standard English Test (EFSET), during 2015. You can take the test online for free.

The study is the sixth produced by EF. It is a yearly report that examines the English knowledge level of adults from 72 countries. It has found most areas in the world are continuing to improve their English language ability.

The report also says that English language remains an important part for a country's economic power.

According to EF Director of Research Min Tran, one quality the highest-ranking countries share is a strong education system. However, he says that may not be enough.

"However, another very important factor is whether your country has an English speaking environment. If you go to Singapore today, you hear English on the streets. You hear Singaporean youngsters mixing Chinese, Malay, and English. Singaporeans are watching TV, watching films, listening to music in English..."

Tran also said the report has found a gender difference in English ability.

"You look at the genders, women are better than men. And we've seen that in nearly every country, every age group, every industry even when you look at business English. Women are just consistently outperforming men." 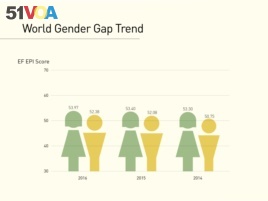 Similar to the previous six years, Europe leads the rankings with its overall strength in English. Netherlands, Denmark, Sweden, Norway, and Finland were the top five countries in Europe and in the world. These countries have been in the top five almost every year the report has been released. The only difference is that the Netherlands has moved from second place to first this year.

The report says there are several reasons these countries perform well. They have strong education systems, and primary and secondary schools in those countries require English language studies.

There are also many chances for people to use English in their day-to-day lives. The report says one very helpful quality is that English is used often in the media of these Northern European countries.

One important change took place in France. It moved from the "Low Proficiency" category last year to "Moderate Proficiency" for 2016. France placed 24 out of 28 European countries included in the report.

"English is a sensitive issue in France because the country is very proud of French and the position of French as the first language in the world. Universities do not teach in English, whereas other universities in Europe do have programs, even entirely in English. So we've seen France go down in the past five years, and this year is the first year they've gone back up..."

The lowest performing countries in what the report considers Europe were Azerbaijan and Turkey. Those countries made small improvements from last year, but their scores were lower than the rest of Europe.

The report says these countries tend to have weaker teaching methods that depend on rote memorization rather than communication. 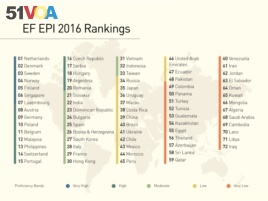 In Asia, Singapore was the highest ranked country, moving to sixth place in the index. Singapore was considered to have a "Very High Proficiency" level for the first time. Tran says this improvement is because Singapore has a very strong education system.

"Well, Singapore's education system is often seen as one of the best in the world. If you look at other English tests like IELTS and TOEFL, Singapore is consistently at the top -- not just in Asia, but throughout the world. It just has a very, very strong education system that focuses on quality of instruction and has extremely high standards for their students..."

Along with Singapore, Malaysia and the Philippines were the next highest-ranked countries. The report says countries with a historical link to the British Empire usually have stronger English levels than other countries in the area.

However, the report says Thailand and Cambodia still have low levels of English proficiency, although they have a growing tourism industry.

China also increased its rank by moving from 47th to 39th place. However, it is behind many other countries in Asia. Tran says this might be the result of its large population.

Adult English proficiency in Latin America remains less strong, the study says. Most countries had a lower rank this year than last year. Argentina is the only country to rank as "High Proficiency." The Dominican Republic follows closely behind.

One reason for Argentina's high ranking, according to the report, is that English teachers there are "highly qualified." They have to complete a five-year training program to teach English in public schools.

Latin America's largest countries, Brazil and Mexico, have lower rankings this year. This is the case although there are efforts to send students to English-speaking countries for university studies.

Tran says one reason these countries do not have higher rankings is the large size of their populations. In large countries, it takes more time for enough citizens to learn English to raise the average English level.

The Middle East and North Africa

The Middle East and North African area had the greatest changes in scores from last year. Morocco and Qatar made the most improvements of all countries in the area, but Iraq and Oman's scores dropped the most.

Tran says some issues causing the low performance in the Middle East and North Africa, or MENA, area are outside of the classroom.

"They are countries that have experienced quote a lot of turmoil. When you have such turmoil in your country for such a long time, then it's difficult for the education system to really make a difference."

The report says that factors affecting these countries are poor education systems and not enough jobs for students after they finish school. This can cause students to not try as hard to succeed in their studies.

The survey did not include sub-Saharan African countries.

First is to make quality English teaching available to all citizens. Next, a country should invest in teacher training, and then invest in its English-speaking environment.

"I think the number one priority would be to make sure that everybody has access to quality English instruction, and to do that I think to then is to leverage teacher training, right? And making sure that you have a teacher supply that is ready to deliver the quality instruction that you need in your entire school system.

"Then it's about creating that English environment in your country. It's having bilingual signs, bilingual venues, having programs in English that are not dubbed, and creating excuses for your students to speak in English, right?" 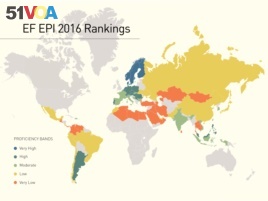 The report shows that it is not easy to improve English-speaking ability country-wide, and it also is costly. But, it is clear that the economic and social benefits make it worth the investment.

How well do you think your country speaks English? We want to hear from you. Write to us in the Comments Section or on 51VOA.com.

proficiency - n. good at doing something

sensitive – adj. easily upset by the things that people think or say about you