Update Required To play the media you will need to either update your browser to a recent version or update your Flash plugin.
By Pete Musto
29 October, 2016


Students who are the first in their family to attend college have a different experience than students with college graduate parents.

Young people today do have many resources available to them. Books and websites offer advice on getting accepted into a school and dealing with life away from home for the first time.

Also, most high schools in the United States have counselors and college advisors. Their job is to help students understand the process of applying to schools. 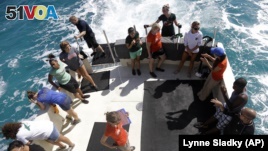 A group of University of Miami students and first generation college-bound students in the Upward Bound program joined researchers in a shark tagging mission in the Florida Keys.

But when Christopher Curran started looking for the right university, he had one less resource than most students in the U.S. His parents never went to college. So, they had little advice to give.

Curran is from the town of Whitman in the northeastern state of Massachusetts. He is the oldest of five children. Curran always worked hard to impress his parents in school and in his daily life.

So, his parents decided he would have what they never did.

Curran's parents had little money. But they worked hard to send him to Boston College High School, a well-known and respected private high school, in 2000.

Curran says he always felt different from his classmates. They had money for new clothes while he worked at a part-time job to pay for his transportation to and from school.

Also, when his classmates began considering which college to attend, their parents could share advice and connections from their own experiences as graduates.

Curran, however, is considered a "first-generation" student, meaning he is the first in his family to attend college.

He is not alone.

The Georgetown University Center on Education and the Workforce is an organization that studies the link between education and career success. Research from the organization suggests almost 32 percent of undergraduate students in the U.S. are first generation.

About 55 percent of students with degree-holding parents completed their programs in the same amount of time.

In 2004, Curran chose to attend Bridgewater State University because it was close to his family. He admits that it was difficult to be unable to ask his parents for advice on specific things like choosing classes. His mother was more worried about the risky behavior that can happen at colleges, especially involving alcohol.

Curran says at first he felt he had to work harder than other students to prove himself. He wanted to show his parents all the effort of sending him to a special high school and to college was worth it. But soon, he understood that having to succeed without the same resources as others also helped make him the man he is today.

"I realized it was a lesson. And I realized that a lot of those kids that I went to high school with weren't going to have the same understanding of how the real world works because they've never had to work for it. So, when I got into college I definitely had a respect for what it took to get there and what it took to succeed. In that it wasn't just something that happened."

Curran finished his undergraduate degree in 2008 and then went on to complete a master's degree as well. He says his path was long and never easy. But, he says, if a person never tries they will never know if they can succeed.

Urena notes that not all first-generation college students are the same. They may be from high or low income families. They may have been born in the U.S. or a foreign country.

Urena works with students at A.C. Davis High School in the northwestern state of Washington. About 80 percent of the students there live in poverty, she says. Also, 49 out of the 50 students in her program have parents who never completed high school.

Most of these students also have had to deal with traumatic experiences in their lives, Urena adds. This includes family members dying or going to prison. Also, families often need older children to work to provide extra income.

Many of her students believe there is no chance they will ever go to college, she says. And those who do make the choice to seek higher education do not know what it requires.

"A lot of times, students don't even know where to begin the process, like what kind of questions they need to be asking"

That is why Urena meets regularly with both students and parents to discuss their goals and how to reach them. She brings community members in to help students with their application materials. The library at A.C. Davis High School stays open late so students can do things like apply for financial aid in their free time.

Nichole Smith agrees that first-generation students need the extra help with the many steps in the application process. Smith is the chief economist at the Georgetown University Center on Education and the Workforce. She says colleges should ensure all the information they provide to interested young people is easier to understand.

But she adds that barriers for students are not completely removed once a college accepts them. First generation students often feel like they do not belong. They also feel greater stress and pressure to succeed, which can cause problems for them, she says.

Smith suggests that colleges and universities should do more to measure the progress of first-generation students. In that way, the dream of a college education can come true for them and hopefully their children as well.

Pete Musto reported on this story for VOA Learning English. Mario Ritter was the editor.

We want to hear from you. Did your parents attend college? Are your children first-generation college students? What do you think are the best ways to support them? Write to us in the Comments Section or on 51VOA.COM.

advice – n. an opinion or suggestion about what someone should do

counselor(s) – n. a person who provides advice as a job

apply(ing) – v. to ask formally for something (such as a job, admission to a school or loan) usually in writing

certificate - n. a document that is official proof that you have finished school or a course of training

realize(d) – v. to understand or become aware of something