American College Students May Need to be More Professional

Update Required To play the media you will need to either update your browser to a recent version or update your Flash plugin.
By Pete Musto
01 October, 2016


College students might be surprised to learn they can take a class that only teaches about climbing trees.

That class is taught at Cornell University in the American state of New York. But it is not the most unusual subject taught by a college or university in the United States.

The Massachusetts Institute of Technology, for example, offers a class on what it calls the mathematics of street-fighting. And Santa Clara University in California has a program called "The Joy of Garbage."

However, classes like these might be one reason many employers feel recent college graduates are not ready for the working world. 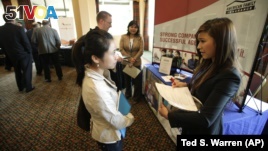 Offering non-traditional classes might also be why some grads feel their college years failed to prepare them for a professional career.

The Association of American Colleges and Universities (AACU) reports on ways to improve higher education.

The group surveyed about 400 employers and 613 college students about how ready those students were to enter the professional world in 2015. The survey found large differences between the thinking of the students and the employers.

Many of the differences were related to skills both students and employers believe are necessary. For example, 65 percent of the students felt their writing skills were strong enough for the professional world. But only 27 percent of employers said college students were well-prepared with that skill.

Another example is the students' ability to work with persons with whom they have little in common. The study showed 55 percent of students felt they were well prepared in this area. But only 18 percent of employers felt the same.

Debra Humphreys is the senior vice president for academic planning and public engagement at the Association of American Colleges and Universities. She says there are several reasons why these differences in opinion exist.

For one thing, she says, the beliefs of both employers and students are unrealistic. Employers are not valuing the skills students offer as much as they should, she says. Also, students may feel they are more prepared than they actually are.

Another reason is that the American economy has changed and employers are asking more of their employees than ever before, she says. Technology helps workers do more with less. The current generation of college students is highly skilled with technology. But there is a limit to what employers can expect from a young person with little professional experience, Humphreys says.

She adds that some college professors or other faculty have not given enough thought to how the classes they will teach will help students find jobs or be good employees.

"We have to do a much better job of talking to students much earlier about what employers are expecting, so that students themselves know earlier in their college careers that these are things they need to work on more than once and over time they need to hone these skills. And then I also think we don't do a very good job in higher education of really intentionally helping students prepare for and make that transition from college to career."

The Adecco Group is the largest professional staffing company in the world. In May, it released the results of a survey of about 1,000 college students and recent graduates. All of those questioned were between 18 and 24 years of age.

The results showed 74 percent of those young people felt their schools failed to fully prepare them for the professional world.

Amy Glaser is a senior vice president with Adecco. She says it is true that students struggle with critical thinking, communication and other interpersonal skills. They use technology well, but overuse can cause their verbal or written communication skills to suffer. Also, they are not often given chances to develop their professional skills, she says.

Students in the survey listed the schools' inability to teach them applicable skills as one of the main ways schools failed to help them. And 21 percent of students said there are not enough internship opportunities.

Internships provide on-the-job training. Employers accept people to work for them for usually a short period of time. Often interns work for the employers for no pay. Instead, the employers offer training in a specific field, or professional experience.

Some employers will offer interns a paying job at some point. But Glaser says the most important thing is that internships help create connections between young people and employers.

"It gives the student the opportunity to get a glimpse into what the real world looks like. It also benefits the employer because they get the added benefit of that new lens coming from the recent college student that may help provide some additional thought and frame of reference that their existing workforce may not have."

However, internships are often limited, and schools can only do so much to help students find them. Also, students are often unable to find time for a paying job if they are already studying and working an unpaid internship. This often affects lower-income students the most.

So, to help all their students be more prepared for the modern workforce, some schools are creating classes with important skills in mind.

Dedra Faine works at George Mason University in Arlington, Virginia. She teaches a class called Civility and Professionalism. George Mason offers the class as part of its degree program in hospitality. But any student can take the course.

Faine says she uses the class to provide students with the skills employers want, such as problem-solving. But she also tries to teach the importance of professional etiquette -- like being on time and taking responsibility for mistakes.

She adds that many ideas about the workplace have changed. But most employers still value traditional social skills and work ethic.

"The formality of the workplace has been taken away. But then they expect, even if you come in your sneakers and your jeans that you can sit at your computer and you can do great work."

Lisa Stephenson is the associate dean of academic affairs and student services at the Washington, DC-based school. She says George Washington started requiring professional-skills classes in 1998. The reason: because students were highly knowledgeable about their subject matter but struggled with skills like writing or public speaking.

However, Stephenson adds the current generation of college students -- often called Millennials -- do have a lot to offer employers.

"Every generation has something to learn from the other generation. And we all need to keep an open mind. The Millennials aren't going anywhere. They're here. They're in our work environment. So how do we work together to make sure our organizations are successful?"

We want to hear from you. What skills do you think young people entering the workforce need? How can colleges and universities help prepare students for the working world?

class – n. a series of meetings in which students are taught a particular subject or activity

professional – adj. relating to a job that requires special education, training, or skill

survey(ed) – v. to ask many people a question or a series of questions in order to gather information about what most people do or think about something

intentionally – adv. done in a way that is planned or intended

staffing – adj. supplying an organization or business with workers

interpersonal – adj. relating to or involving relations between people

verbal – adj. spoken rather than written

applicable – adj. able to be applied or used in a particular situation

internship – n. a program involving a student or recent graduate who works for a period of time at a job in order to get experience

glimpse – n. a brief or quick view or look

benefit(s) – v. to be useful or helpful to someone or something

hospitality – n. the activity of providing food, drinks or other services for people who are the guests or customers of an organization

etiquette – n. the rules indicating the proper and polite way to behave

work ethic – n. a strong belief in the importance and value of work