Update Required To play the media you will need to either update your browser to a recent version or update your Flash plugin.
By Dorothy Gundy
30 September, 2016


This week on our National Park series we travel to a dramatic western landscape in Wyoming. The area's huge mountains rise and rise and rise some more. Their jagged peaks shadow the beautiful valley of Jackson Hole. Rushing rivers wind their way through the land. Wild animals roam and flowers, trees and other plants thrive.

Grand Teton sits 16 kilometers south of Yellowstone National Park. It is part of the Greater Yellowstone Ecosystem, one of the largest ecosystems in the world. 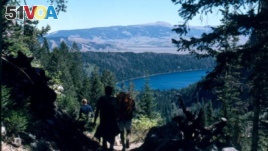 Humans first came to the area more than 11,000 years ago. Native Americans hunted animals, gathered plants and collected rocks for tools. To this day, native groups consider the mountains sacred.

In 1862, the United States Congress passed the Homestead Act in order to settle the western lands. The law permitted any current or future citizen to claim a plot of land for just ten dollars.

Many did. But the extreme weather and rocky soil of the Teton area made it difficult to raise crops and cattle. By the early 1900s, some homesteaders opened dude ranches. These were places where wealthy people could pay to experience the cowboy life. The cost included lodging, food, the use of a horse and involvement in outdoor activities.

Millionaire businessman John D. Rockefeller toured the Grand Teton area in 1926. He fell in love with the mountain scenery. He bought land in and around the Jackson Hole valley. A few years later, Congress created a small national park that protected the Teton Range and its lakes at the foot of the mountains. 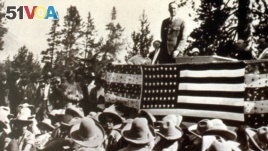 Later, around 1950, the small park and Rockefeller's land were combined to form the present-day Grand Teton National Park. Working ranches still exist in Jackson Hole today. The local economy, however, depends on tourism and wealthy homeowners.

Visitors almost anywhere in Grand Teton can look up and see beautiful, pointed mountain peaks. The Teton Range is relatively young. At almost 4,200 meters high, Grand Teton is the tallest of the range.

But all the mountains are pretty tall. Nine other Teton peaks reach higher than 3,600 meters. They rise suddenly along the western side of the valley. Forests blanket the mountainsides. Many lakes are found at the foot of the hills. 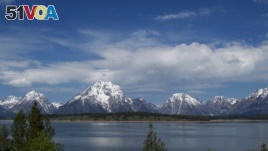 The Snake River runs through the Grand Teton National Park from north to south. The park has some of the oldest rocks of any U.S. National Park. Some are as old as 12 million years. 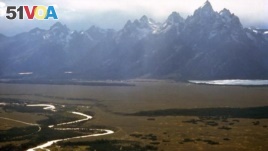 Mormon Row is one of the most historic places in the park. The Church of Jesus Christ Latter Day Saints, or Mormons, established the area in the late 1800s. The settlers moved into the area from nearby Idaho. They became farmers. They built water systems which led to their great success in farming.

On Mormon Row sits two picturesque barns. Homesteaders and brothers John and Thomas Alma Moulton built them in 1913. The barns sit in a field with a clear view of the Teton range. Beyond the barns, there are many other historical homesteads to explore. 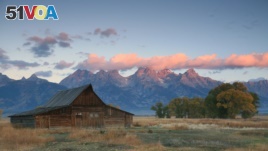 Mormon Row leads to Antelope Flats. That is where we find the open grass and prairie lands of the Jackson Hole area. It is a perfect place to see wildlife such as antelope, elk, bison, moose, and coyote. 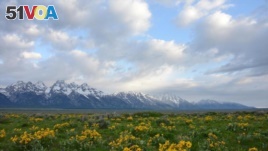 Grand Teton National Park offers many activities including hiking, swimming, skiing and fishing. And it remains a place where visitors can go if they dream of a taste of the cowboy life.

Dorothy Gundy reported on this story for VOA News Learning English. Caty Weaver was the editor.

ecosystem – n. all living things, such as plants and animals, and things that are not living, such as rocks, soil, sunlight, and water in one environment

fur trappers – n. a person whose business is the trapping of animals

homesteaders – n. people who go to live and grow crops on land given by the government, especially in the past

dude ranch – n. a large farm especially in the western U.S. where people on vacation can ride horses and do other activities that cowboys typically do

lodging – n. a place to live or stay

scenery - n. a view of natural features (such as mountains, hills, valleys, etc.) that is pleasing to look at

picturesque – adv. very pretty or charming, like a painted picture