Got Baboons in Your Crops? Offer Them a Snake Sandwich

Update Required To play the media you will need to either update your browser to a recent version or update your Flash plugin.
By Jerilyn Watson
2010-7-26 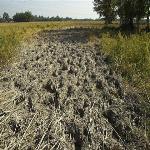 Photo: AP
A field destroyed by wild elephants in Rangapara, in India

When farmers and wild animals share land, conflicts can be hard to prevent. But the United Nations Food and Agriculture Organization is trying to help.

The FAO and other groups are developing what they call the Human-Wildlife Conflict Mitigation Toolkit. This toolkit is a collection of advice and information that farmers in southern Africa have been testing.

Wild animals are considered a top problem for the physical and economic security of rural populations in Africa.

FAO official Rene Czudek says the main aim is to provide low-cost methods to deal with wild animals without harming them.

For example, some farmers in Kenya use donkeys to guard against lions and cheetahs.

In Zambia and Mozambique, crocodiles are blamed for more deaths than any other animal. Nile crocodiles kill an estimated three hundred people each year in Mozambique alone.

Strong fencing at watering points can offer protection. And people should always enter the water several at a time, in groups armed with weapons like sticks and stones, axes and spears.

But the FAO also points out that crocodile attacks are less likely in places that have not been overfished.

The toolkit also has ideas to control baboons. These large monkeys raid crops and they can kill sheep and other livestock.

One suggestion is to remove the center from a loaf of bread and hide a snake inside -- a live one if possible. Baboons have a fear of snakes. They also have good memories. Rene Czudek at the FAO says a baboon frightened by a snake sandwich will probably not come back.

Another animal with a good memory -- the elephant -- often raids field crops, especially maize and cassava. Mr. Czudek says the loss of a maize crop can mean the loss of a family's food supply for a year.

Farmers can grind pepper, mix it with elephant waste and form bricks. The idea is to burn these bricks around the edges of fields to keep elephants away. Farmers can also grow fields of chili peppers -- and sell the surplus.

Another way to control elephants is with a plastic gun called the Mhiripiri Bomber. It fires balls that burst and release a chili solution when they hit the elephant's skin.

You might also be able to stop an elephant or a hippopotamus by shining lights in their eyes.

The FAO toolkit is supposed to be available online soon.