Update Required To play the media you will need to either update your browser to a recent version or update your Flash plugin.
By Dan Friedell
27 July, 2016

Do you remember the Ice Bucket Challenge in 2014?

Just in case you do not, here is a little history.

Two years ago, some people dared friends to pour a bucket filled with ice water over their heads. If the friends refused, they were required to donate money to help finance research into a brain disease. Most of them took the cold water and donated money, too.

Many people recorded themselves getting covered with freezing water. They posted the videos on social media websites, such as YouTube. Then they dared others to pass the challenge. 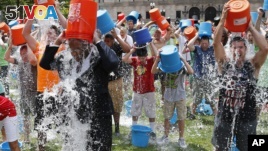 In the summer of 2014, many people were doing the ice bucket challenge to raise money for the brain disease ALS. Two years later, the ALS Association announced a major breakthrough.

As the campaign grew in popularity, sports stars, politicians and media celebrities got involved. Lots of other people did, too. Eventually, the campaign raised over $100 million for an organization called the ALS Association.

ALS is short for amyotrophic lateral sclerosis. Doctors first recognized the brain disease in the 1800s. ALS became known across the United States in 1939 when baseball star Lou Gehrig retired from the New York Yankees because of the condition.

ALS affects nerve cells in the brain and the spinal cord. Eventually, patients cannot control their muscles. They become paralyzed. Most patients will die within five years after they develop the disease.

Earlier this week, the ALS Association announced that money raised by the Ice Bucket Challenge financed a discovery.

Researchers working on a project called MinE announced they identified a gene that is partly responsible for the disease. The gene is called NEK1.

The study involved researchers from 11 countries. They looked at the NEK1 gene and found that it was present in ALS patients whose parents also suffered from the disease.

One of the doctors involved said "the ALS Ice Bucket Challenge enabled us to secure funding from new sources in new parts of the world."

What do you think of the news about ALS? We want to know. Write to us in the Comments Section or on 51VOA.COM.

dare – v. to tell (someone) to do something especially as a way of showing courage

paralyze – v. to make (a person or animal) unable to move or feel all or part of the body