Update Required To play the media you will need to either update your browser to a recent version or update your Flash plugin.
By Susan Shand
28 September, 2019


Just before sunrise, Shainkiam Yampik beats a drum at the start of a Roman Catholic prayer service in Wijint, a village in the Peruvian Amazon.

"Jesusan namanguinde," he says. That means "the body of Christ" in the language of the Achuar people. Yampik gives communion bread to villagers in a small religious center. During the service, they hear the sounds made by birds and insects outside the building. 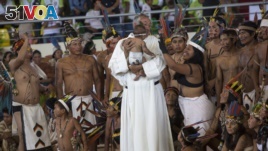 A priest holds a baby as clergy and indigenous people wait for the arrival of Pope Francis in Puerto Maldonado, Madre de Dios province, Peru.

Yampik is a tribal leader and has 10 grown children. He is also a leading Catholic in a community far from big cities. Wijint is one of the most remote areas served by the Roman Catholic Church.

Yampik is a deacon in the Church. He cannot become a priest, or clergyman, because he is married.

That means he cannot celebrate the Catholic Mass. The villagers may go many months without attending Mass because of the lack of priests. The communion bread he gives is consecrated by a priest in another town.

Yampik and other Achuar Catholics in the Peruvian Amazon are hopeful a historic meeting at the Vatican next month will change that.

On October 6, Pope Francis will open a three-week meeting of Amazonian bishops. One issue to be discussed is whether to let married men in parts of the Amazon become priests. If approved, the proposal would break hundreds of years of Roman Catholic tradition.

The idea is to let older married men with grown children and a strong standing in the Church become members of the clergy and lead Mass.

Wijint is one of 827 native communities in Yurimaguas, an area the size of Panama. It has just 25 priests, the Reverend Jesus Maria Aristin told Reuters.

"It's impossible to reach them all," Aristin said. He remembered that a recent visit to a village required a four-day walk through the Amazon.

At least 85% of villages in the area cannot celebrate Mass every week. During the service, Catholics believe communion bread and wine become the body and blood of Jesus.

Yampik is one of four married deacons who will be considered for the priesthood at the Vatican meeting, said Aristin.

The proposal could be explosive within the Catholic Church. Pope Francis is under attack from conservative Catholics; some have called the idea "heretical."

The proposal says men can become priests "even if they already have an established...family," in order to celebrate Mass.

Conservatives say it will lead to the end of the Church's rule that priests remain celibate. The rule became a requirement around the year 1300 to stop priests from passing Church property to their children.

The Church teaches that by remaining celibate and unmarried, a priest can live only for God and the Church.

But the celibacy requirement makes it difficult to interest men in becoming priests.

Just 40 years ago, the Church's presence in this part of the Amazon was growing. One reason was the work of an Italian priest, Luis Bolla. He persuaded many Indians in Peru and Ecuador to accept Christianity.

Bolla was unusual. He lived among the Achuar for many years and spoke their language. He died in 2013.

Today, it is hard to get outsiders to stay in Achuar villages, noted Yampik.

Achuar is among the last Amazonian tribes to come in contact with non-natives. The natives had a traditional religion. To win converts, Bolla added some of their own customs to Catholic Mass, a tradition Yampik keeps alive today.

That multicultural method was once not accepted, but today is celebrated by the Church under Pope Francis.

The Achuar have found "the word of God," Yampik said.

drum – n. a musical instrument shaped like a container

communion – n. a Christian ceremony in which bread is eaten and wine is drunk as a way of expressing loyalty to Jesus Christ

remote – adj. far from cities or the main population centers

deacon – n. an official in some Christian churches whose rank is just below a priest

consecrate – v. to officially make (something, such as a place or building) holy through a special religious ceremony

bishop – n. an official who is rated higher than a priest in some Christian religions

heretical – adj. someone who believes or teaches something that goes against accepted or official belief

celibate – adj. having or involving no sexual relations

convert – n. someone who has been persuaded to change their religious beliefs